My first post, so be gentle~
Yesterday was a tough day for AKB fans. Yes, we're talking about Japanese TV that aired public bullying on female idol in Japanese prime time show.
On this crazy event, there are wide range of reactions. Some are from fans, and some are non-fans who have some say on the issue. Some extreme fans got so angry that they even sent death threat to the comedian who kicked Watanabe Mayu’s head. Simply put, this has generated sorta of a little social discussion on the net.
As usual, in our post, we would like to introduce reactions from Japanese fans, but before messing with the colorful reactions, you may want to know what Mayuyu herself said about the incident.
One days after the TV broadcast, Mayuyu addressed a following statement on her blog:
Good evening everyone!
Yesterdays “27 hour TV” was a great funーヾ(＠⌒ー⌒＠)ノ
I kind of felt like it helped me discover a brand new perspective on life LOL
Please don’t worry. I’m totally fine! But thank you for your concern.

This is gonna be the most memorable event of this summer (^o^)
Pretty much mature comment as expected from Mayuyu, isn't it? But the fact that she had to write this calm down fans is the solid proof that there was huge backlash.
( Collapse )
Sources: http://www.akb48wrapup.com/2013/08/watanabe-mayu-got-kicked-in-her-head-stir-colorful-internet-reactions/
http://blog2.akb48teamogi.jp/watanabemayu/?p=58
Full footage: http://video.fc2.com/content/20130803wfH3YDak/
Related article:http://en.rocketnews24.com/2013/08/05/die-die-die-die-die-die-die-die-fans-rage-after-variety-show-host-kicks-akb48-starlet/ 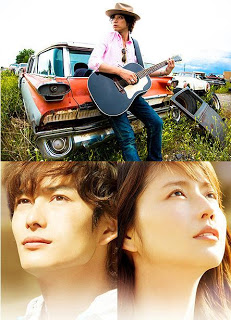 Saito Kazuyoshi will be singing the theme song for movie "Kiyoku Yawaku" which features Nagasawa Masami and Okada Masaki and is due to be shown in Japan from 26 October. The song titled "Kagerou" was specially written for the movie. Nagasawa plays the role of Kanna who lost her childhood friend Haruta (Koura Kengo) due to a traffic accident during the summer of her first year in senior high school and finds herself unable to move on from the blow until she meets Riku (Okada) who had a similar experience in the past and they start to get closer.

Saito who made his major debut in 1993, achieved a breakthrough in his career when his song "Yasashiku Naritai" was used as the theme song of popular drama "Kaseifu no Mita". Upon receiving the invitation to sing the theme song for this movie, Saito read the entire manga which was a first time time for him since he never read shoujo manga before. He was touched by the depth of the story and how people recover from the loss of important things in their lives so he hope that the song can convey the message in the story. The CD release date of the song is undecided as yet but will be available for download via Chaku Uta and iTunes from 3 August. It will also be available for viewing via Toho's YouTube channel.

The Japanese movie news website Cinema Today has uploaded a trailer for The Extreme Sukiyaki to their YouTube channel.

The film marks the directorial debut of novelist Shiro Maeda, who also wrote the original novel on which it’s based and penned the screenplay. Maeda has quickly made a name for himself in the literary world, having won the Yukio Mishima Prize, Galaxy Award, and a nomination for the 2005 Noma Literary New Face Prize. His past film work includes adapting the screenplay for his own novel A Honeymoon in Hell: Mr. & Mrs. Oki’s Fabulous Trip, writing and adapting the the stage play which inspired Isn’t Anyone Alive?, and adapting the screenplay of The Story of Yonosuke.

In the new film, Arata Iura and Yosuke Kubozuka—who last co-starred together in the 2002 comedy Ping Pong—play former college buddies Horaguchi and Okawa. After being apart for 15 years, the pair suddenly reunite on a whim and attempt to resume the friendship by planning a trip together. Meanwhile, Okawa’s live-in girlfriend Kaede (Kana Kurashina) and Horaguchi’s ex Kyoko (Mikako Ichikawa) get roped into joining them. Soon, the four head off on a trip together with the goal of sharing sukiyaki by the sea.

“The Extreme Sukiyaki” will be released by Suurkiitos in Japan on November 23, 2013. Nikkatsu is handling international distribution.

The film stars Masaharu Fukuyama as a successful family man named Ryota who discovers that his 6-year-old son was actually switched at birth with the son of another couple. Ryota, his wife Midori (Machiko Ono), and the other couple involved (Lily Franky and Yoko Maki) are forced to consider what it really means to be parents and which bonds are most important.

“Like Father, Like Son” premiered at the Cannes Film Festival earlier this year and took home the Jury Prize. It will be released in Japan on October 5, 2013.

LEVEL3 will Officially be Released on October 2nd, 2013.

Perfume’s Official Facebook has also revealed that LEVEL3 will be receiving a global release, however dates and locations are yet to be announced (Source: Facebook).

The album will feature all the A-sides from Spring of Life to Magic of Love. It will also feature Party Maker from the Chocola BB promotions. The rest of the tracklist has yet to be revealed.

The album will be available in the two traditional versions:

☆ The slipcase of the the limited edition will be available in 3 different colors. While the slipcase varies, the album art will not. As of the current moment, the choice of color is not negotiable whether pre-ordering over the counter or online.


As previously announced, Perfume has been selected as the new spokespersons for Eisai’s Chocola BB! Their new CM featuring Party Maker, a song from their upcoming album will being airing from August 6th.