New updated information has surfaced on hyde's Vamprose official website with details on the upcoming release. Once again the special project of hyde's HALLOWEEN JUNKY ORCHESTRA will release a new maxi single titled,"HALLOWEEN PARTY" which will drop on 2013.10.16 for a cost of 1,500yen, and includes CD+DVD.

Furthermore it has been announced that this year there will also be a new hyde figurine sold at the venues. The largest Halloween event in Japan's history which carried several dates and locations in the past has not been revealed as of yet for "Halloween Party 2013" but we will keep you posted on the schedules as they are announced.

excited for the pv!!!

Nogizaka46 have revealed that they will release a new single (currently untitled) on November 27.

This surprise announcement was made on August 30 during the Zepp Tokyo daytime concert of their nationwide tour 'Manatsu no Zenkoku Tour 2013'. Regarding the new song, captain Sakurai Reika commented, "We want to make a single that will meet the expectations of everyone and surpass our previous single 'Girl's Rule'."

The details and senbatsu members for the single have not been revealed at this time. Nogizaka46's 6th single "Girl's Rule", with Shiraishi Mai as center, has become a hit song selling over 500,000 copies.

I didn't know that Girl's Rule reach 500K; in this case they are the 3rd among AKI-P's current creation who reached 500K and their fans as well as the 48 family fans that support them can boast that they achieved it without the bikini tactics. 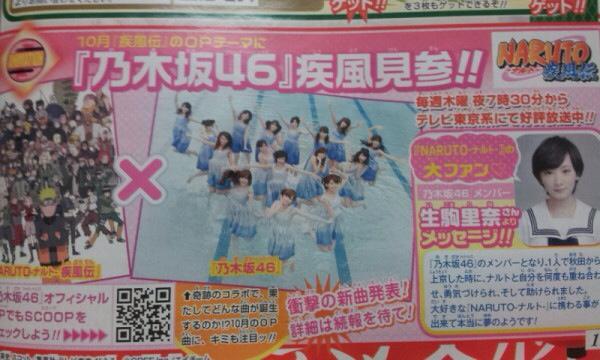 It is reported that idol group Nogizaka46 will sing the new opening theme song the anime Naruto.

I can't believe that someone from 48/46 family will sing an opening song of a popular anime. I think the producers was impressed at the B-sides of Nogi's last single Koumori you and Sekai de Ichiban Kodoku na Lover are really amazing and non-idolish