@goshi_newspaana
There's this local program in Hokkaido called U-gata Terebi, and they featured a gossip which according to them could not be broadcast in Tokyo. The most risqué news there was about Tegoshi-san having an affair with idol "K".
( Collapse )
Sources:http://majide2ch.blogspot.com/2013/10/yuya-tegoshi-dating-idol-k-local-tv.html
http://hayabusa3.2ch.net/test/read.cgi/news/1380901741/

While the member solo activities increase, KAT-TUN's activity as a group is poor.  The schedule of national tour was scrapped. The theme song for their CM only got released by limited distribution download. What has happened to KAT-TUN?

Although it was decided on the 21st that the theme song of Yuichi Nakamaru starring drama on TBS would be a new song of KAT-TUN but the CD release of the single is still undecided at present and fans are growing more and more uneasy.  Although the single "FACE to FACE" was put on the market in May of this year.   It is said that Koki Tanaka's wild private life has interfered with activity of the group.  Koki went ahead and opened a member-only club without Johnny's approval.   Even Koki's appearance in the 3-member radio program KAT-TUN with Nakamaru and Junno has decreased sharply.  Their Suzuki CM theme song "BOUNCE GIRL" was only released as limited time offer distribution for about one month at the end of August.   Furthermore, the theme song of Kamenashi Kazuya's drama "Tokyo Bandwagon" on NTV is a musical piece by a unit with Koji Tamaki and Kame.  And many fans who were expecting the new song release as KAT-TUN are disappointed.

Fans are even more worried that Nakamaru's drama theme song has not come out with a release date.  It doesn't help that Tamaki joked about KAT-TUN will disband and a new band "Hotta Family Band" will be formed.  Even though Kame has denied the disbandment but no one can laugh about this because of the numerous KAT-TUN dismissal reports flowed out by the media.

If there is no CD release, there will be no opportunity to appear on popular music show as a group.  And the only other venue where KAT-TUN can be seen together is at the concert.  But it's been said that Mary Kitagawa, J&A Vice President is angry because a lot of money was spent on KAT-TUN's CHAIN concert last year to set a gorgeous stage and the company did not gain any profit from CHAIN ticket sales.  After the production cost, the company lost money  and in the red.  Mary even thinks having a KAT-TUN concert is useless.  For now, it looks like each member solo activity will be prolonged.  Fans are wondering when they can see the five of them again. 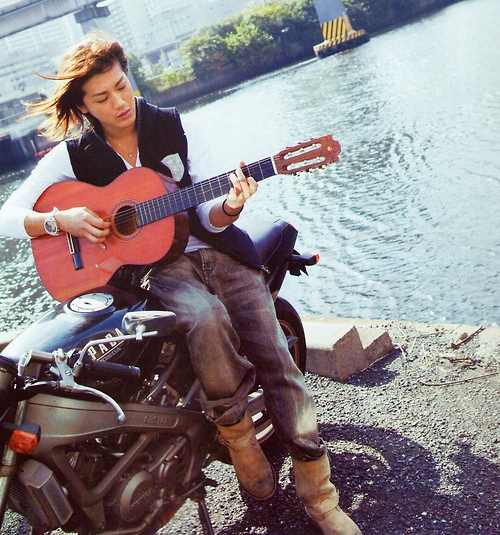 All of the tracks on "#JUST JIN" will be written, composed and produced by Akanishi himself, showing off his multifaceted talents as an artist. In addition, all 4 of Akanishi's solo singles will be featured on the album.

The upcoming album is the idol's 2nd studio album. His first, "JAPONICANA", was released on March 7, 2012, serving as the culmination of his attempt to break into the US market.

On Thursday it was announced that former AKB48 member Sayaka Akimoto and actor Kanata Hongo will star in Sakichi Sato’s Doreiku: Boku to 23-nin no Dorei.

The article from Nikkansports also mentioned that Yuuga is falling in love with his sister Eia. But in the original story, Yuuga and Eia are not siblings. Not sure if the article was wrong or they changed the setting in the movie.
Collapse