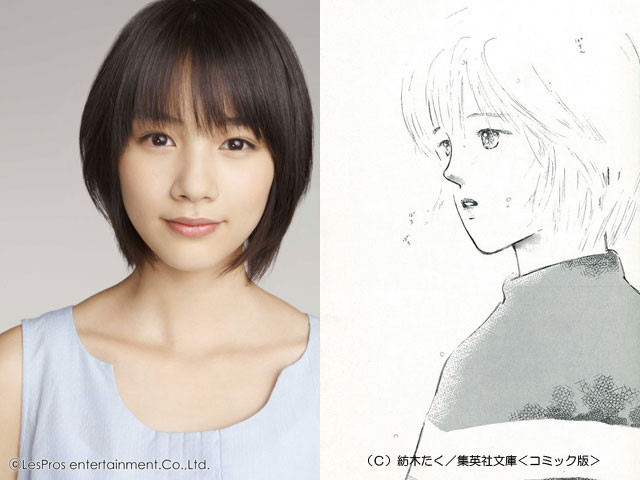 Nounen began her acting career with various supporting roles in TV dramas and feature films such as Good Morning Everyone! and Crow’s Thumb, but more recently she experienced a surge in popularity after playing protagonist Aki Amano in the successful NHK drama Amachan, having won the role in an audition of 1953 young actresses. In fact, it was reportedly her impressive performance as Aki which led screenwriter Tomoko Yoshida to begin adapting a film version of Tsumugi’s work in the first place.

The original Hot Road manga was serialized in Bessatsu Margaret from January 1986-May 1987. To date, its four volumes have reached a total circulation of over 7 million copies.

In the film version, Nounen will star as Kazuki Miyaichi, a teenage girl who feels unloved by her mother due the circumstances of her birth. Because she harbors anxiety and perceives herself as being worthless to others, she engages in acts of juvenile delinquency. One day, a transfer student from Yokohama named Eri introduces her to Hiroshi Haruyama, a reckless youth who’s a member of the “Nights” motorcycle gang.

Kazuki finds herself increasingly drawn to Hiroshi over time, but he soon becomes leader of the Nights and gets caught up in a conflict with a rival gang.

Takahiro Miki (Solanin, We Were There) will helm the project. Filming will begin in November and ramp up in December. A nation-wide release is slated for summer 2014.

BULLET TRAIN/ Choutokkyuu will be releasing their 5th single, Kiss Me Baby, on November 13!