The song is a collaboration between SPICY CHOCOLATE's central musician KATSUYUKI a.k.a. DJ CONTROLER, Shonan no Kaze's HAN-KUN, and singer-songwriter TEE. It was released as part of the 'SHIBUYA RAGGA SWEET COLLECTION 2' album in September 2012.

NTT DoCoMo appointed the heartrending love song as the theme song for their new emotional winter commercial (clip above) in November 2013, which soon resulted in it skyrocketing towards the top of the digital charts. Before the commercial, the highest chart position of the song had been the 19th rank.

No other song has managed to simultaneously stay on the top of both of Recochoku's main rankings for five consecutive weeks since the platform's opening in December 2010. It can easily be described as the number one love song of the current smartphone era.

"Zutto fea. HAN-KUN & TEE" will also be featured in the unit's upcoming best album titled 'ZUTTO SPICY CHOCOLATE! ~BEST OF SHIBUYA RAGGA SWEET COLLECTION' that is set to be released on February 12th.

Not new news but I was curious about the song's popularity before. A suitable song for Christmas and wintry season. 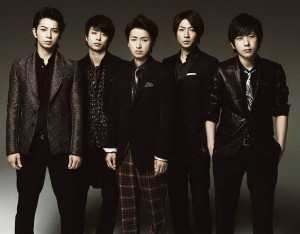 Popular Johnny’s group Arashi, who hosted last year’s Kohaku Uta Gassen, is unstoppable this year as well. Many of the TV magazines at the end of the year featured Arashi on their covers. A publisher commented, “I was surprised to see even ‘AERA” featuring Arashi on its cover at the end of the year, but thanks to that, they almost sold out.” Just 2~3 years ago, Arashi was still competing with SMAP for magazine covers, but gone are those days.
Publishing is just the tip of the iceberg. Arashi appeared in various TV specials for the year end and New Year celebrations. The TV industry can no longer live without Arashi. A source from a TV station commented, “They don’t just have group activities. For example, if you look at “News Zero”’s Sakurai-kun, he has a lot of individual activities. I’ve heard that he doesn’t really sleep. Whenever Arashi appears the viewer ratings go up. We can’t do without them.”

When they debut on a luxurious cruise ship in Honolulu, Hawaii in 1999, few in the media would have imagined that Arashi would make it this big.
The previous source added, “It went around at that time that a Johnny’s group with a kanji for its name would not last long. “Ninja” and such. People were thought Arashi would end up the same.” That same Arashi has now platinum-status concert tickets. Arashi concert tickets sell unimaginably well.

It has been said that even Johnny Kitagawa himself cannot secure tickets to Arashi concerts. A source from a production company commented, “Juniors from Johnny’s often watch their seniors’ concerts and musicals in order to improve themselves. However, only for Arashi concerts, even Johnny Kitagawa, who has absolute power in the agency, cannot get tickets. This isn’t a problem for any other group except Arashi. They are so popular that there aren’t even many seats reserved for their own guests. Arashi is really the top among Johnny’s.”

With more than 1.5 million members in their fan club, Arashi has long surpassed SMAP. It is no wonder that their tickets have become so precious.
As for how long Arashi will last, it seems like their unwavering position in the Japanese entertainment industry will last for some time still.

I remember I read somewhere that the members in Arashi FC have increase since last december. Sasuga Arashi
Collapse