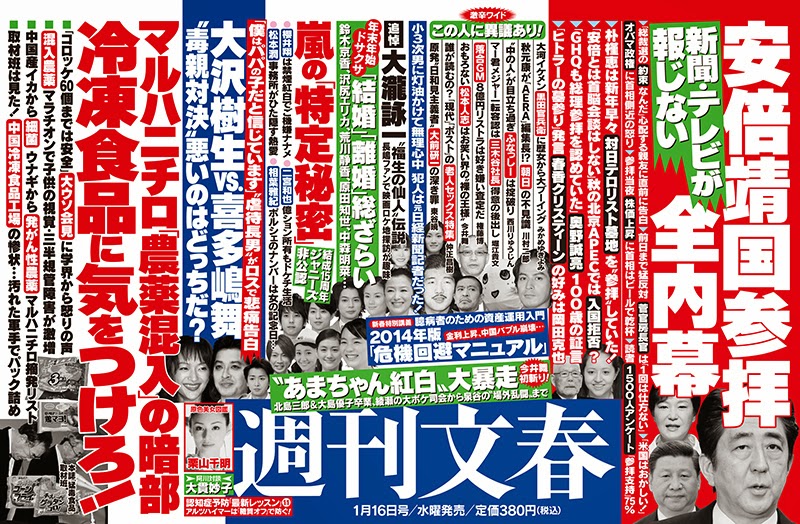 Shukan Bunshun (16th January issue) reports that a magazine had snapped shots that definitively proved a romance between Matsumoto Jun and Inoue Mao last November but the article was not published and replaced by an Arashi spread. A weekly magazine writer commented that with Mao starring in next year's NHK Taiga drama, it was her side that was more concerned with its publication and under pressure from Johnny's Jimusho, the story never made it to print. As a result Mao's agency now owes a big favour to Johnny's.

This article from Shukan Bunshun was Jun's part of its Arashi secrets. The others are Sho being irritable during Kouhaku because he couldn't smoke, Nino's miserly lifestyle despite living in a luxury apartment and Aiba's Porsche plate number having something to do with his girlfriend. No mention of Ohno.

Hahaha this is fun, the most intense fandom strikes again but I beleive it is because of Yuko's graduation that they need to push/discover new girls/hidden talents or else they will fully sink. BTW the new center of Nogi's single is the girl who Shori likes in his drama Forty Nine

Staff were whispering about Junno‘s rise in popularity after his goods were sold-out way before other members during KAT-TUN’s Fan Meeting. When Junno’s goods got sold-out, fans still waited in line and some started “booing!” when no new goods arrived; staffs agreed that they miscalculated Junno’s popularity. Insiders commented that Junno’s popularity is because of “Legal High” drama where fans finds his character delicious.

"Johnnys agency carefully calculated the stock according to the popularity. Of course considering the popularity aspect, the one with the most goods produced is Kamenashi. -Entertainment PR executive. While Taguchi's good was produced half of that amount.

That kind of balance has been decided by looking at the order of popularity, Johnnys will be pleased with the sold out, but there are increasing complaints from the fans who wanted to buy the sold out goods. However this is obviously due to Taguchi's sudden soaring popularity.

"It is the effect of Legal High drama! Taguchi's tasty image is not bad at all! So his fans soared up high!." Those are the words of fans.
Publication officials/staff who is in charge of the goods was surprised with the amount of sales and also said that "I was getting worried seeing the protest from fans."

this might just be talking about the goods, but there's no doubt Junno has shot up the radar
Collapse