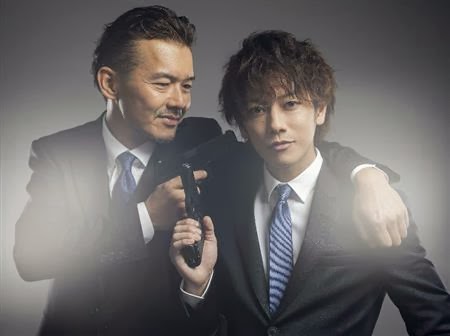 Actors Takeru Sato and Atsuro Watabe will be starring as a father and son detective duo in Bitter Blood which will begin airing in April on Fuji TV (Tuesdays-9). The story is about a detective who was separated from his father since his childhood days, but coincidentally gets appointed as his "buddy" at work.

This is Sato's first time playing as a detective, as he started his career with Kamen Rider Denno, played a swordsman in Rurouni Kenshin, and then a popular creator in his latest movie Kanojo wa uso wo Ai shisugiteiru. "I used to watch Odoru Daisousasen and have admired policemen, so I'm pumped up for this one. I read the script about being buddies with my dad in the drama, and I've gotten excited."

The original book was written by Shusuke Shizukui (45) and sold over 130,000 copies. The screenplay is written by Shota Koyama (26).

The role that Sato will be playing is that of a newbie detective who gets assigned to the first division of the Ginza Police department where his father (played by Watabe) whom he has not met since the divorce when he was 13 is stationed. The two are definitely not on good terms, but will be teamed up with one another. The story will develop around the son who learns the ropes of being a detective while continuously arguing with his father, and the father who still feels sorry for divorcing his wife to concentrate on being a detective.

Watabe comments: "This drama is bound to entertain people, and the screenplay is astounding. I will definitely give my best efforts for this."

( Collapse )
Directed by Toyoda Toshiaki (Blue Spring) I can't waiiittttt. "I'm flash" was good too. I didn't like Crows Zero (boring as hell) but I'm def watching this one! Soooo there is also this guy everyone's talking about, Higashide…

Former AKB48 member Atsuko Maeda joins the cast of the upcoming Eight Ranger 2 film. She will star alongside with boy band Kanjani8, who will play the titular hero team.

Maeda will play the role of Jun Saigo, a weekly magazine reporter who is looking into recent rash and mysterious disappearances in Eight City. Thinking that the Eight Rangers may somehow be involved in the situation, Saigo begins a penetrating investigation into their personal affairs.

Eight Ranger 2 takes place 5 years after the events of the first film. In the sequel, our heroes must protect Eight City from a new menace.

This comedy action film is directed by Yukihiko Tsutsumi, who also worked on the first film. The film promises to ramp up the comedy even further but expect some emotional scenes, especially in the film's climax.