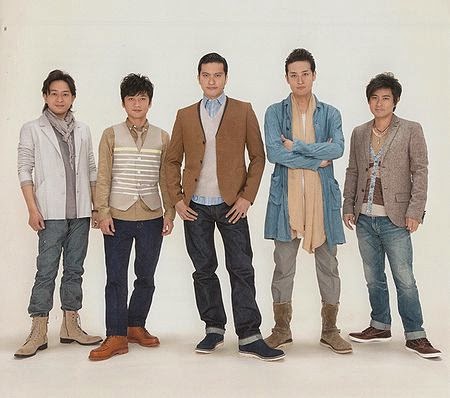 TOKIO which will be celebrating its 20th anniversary on 21 September, will be taking part in the annual Natsu Fes held during July and August thus being the first artiste from Johnny's Jimusho to do so. The members had a discussion among themselves last summer on what they should be doing to commemorate their 20th aniversary and decided to challenge themselves by taking part in the Natsu Fes which is a series of outdoor concerts involving various artistes held during summer. First of all, they will be appearing on one of the two-day concerts "JOIN ALIVE" held at Iwamizawa City, Hokkaido, on 19th and 20th July and will also take part in the two-day "Summer Sonic" held at Chiba's QVC Marine Field, Makuhari Messe and Osaka's Maishima on 16th and 17th August.

At the same time, the band will be releasing a 2-CD best hits album titled HEART in summer whereby the track list will be decided by fans. They will get to choose from 71 singles released to date which will be included in disc 1 while disc 2 will contain tracks from 146 coupling songs and album songs. TOKIO commented that they won't be able to decide on what songs to include so they decided to let fans make the choice.

Last but not least, the band will embark on their nationwide tour consisting of 13 concerts in 12 cities and the last one will be held at Nippon Budokan on 2 November. This was the same venue where they made their debut 20 years ago so it will be a memorable day for the members and fans alike. The commemorative 20th anniversary logo was designed by vocalist Nagase Tomoya and will be used in the album and concert tour.

Hirofumi Watanabe, the suspect in the Kuroko’s Basketball threat letter case, admitted to all the charges in his first day in court on Thursday. He added that he will accept the court’s judgment and any punishment without appeal.

The Tokyo Metropolitan Police arrested the 36-year-old Osaka temporary worker on December 15 and accused him of sending threatening letters to convenience store chains and other establishments linked to Tadatoshi Fujimaki‘s Kuroko’s Basketball manga.

Watanabe said that he made the threats out of jealousy. He asserted that he was abused by bullies and his parents during childhood, and according to The Japan Times newspaper, he also asserted that he has “homosexual tendencies.” He said that he wanted to kill himself before making the threats, and would try to do so again when he is released from prison. “That way, society can rest assured that I won’t do anything stupid again.”

Upon learning about Fujimaki’s successful career and life compared to his, he thought that “if I somehow managed to harass and depress him, I could drag him into my suicide journey.”

Although he admitted to the charges, he added that he does not feel guilty, will not make an apology, and is too poor to pay restitution. Nevertheless, he said he will accept responsibility.

I'm glad he's going to get punished, but this bitch ain't even sorry.

And I would like to apologize for not being able to load the video that came with this article. It was made private by time I was actually able to submit this because arama has a post submission limit now?

Vimclip released their album "Masterpiece" this month. This is a collection of PVs and performances from their album.

It has been reported along with a photograph in the magazine Josei Seven that the actor Oguri Shun (31) and the actress Kuroki Meisa (25) drank together at a late night pub.