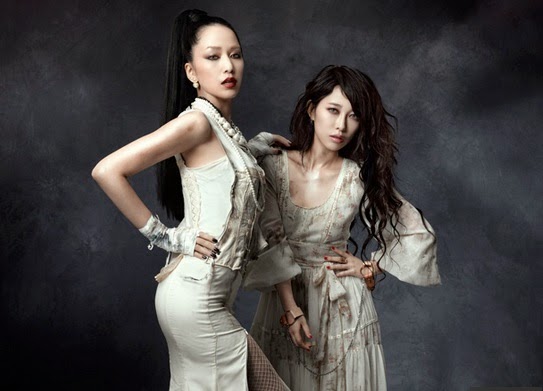 Nakashima Mika and Kato Miriya will be working together for the first time in the song "Fighter" which will be included in the 2014 World Cup's official album involving various artistes all over the world and released as a single in Japan on 4 June. The song was chosen as the Asian representative for the tournament's album which will be sold from 21 May. The duo will also be invited to Brazil and are expected to perform the song live there during a World Cup-related music event.


Nakashima and Kato have been close friends all along but this is the first time they are working together. The lyrics were written by them while Kato composed the melody. The song "Fighter" is a rock number with a samba feel which will stir the competitive spirit. They both expressed admiration for each other and are proud to be chosen as the Asian representative in the World Cup album.

Actress Rena Nounen has been cast to play the lead in the movie adaptation of the popular manga Kuragehime (scheduled for a December 2014 release). She plays the role of an otaku who loves jellyfish. Starring alongside her are Masaki Suda, playing the role of a good-looking young man whose hobby is cross-dressing, and Hiroki Hasegawa, who plays the role of the virgin ikemen elite who has a fear of women. Nounen comments on the upcoming otaku role and says: "I'm currently thinking hard how I should be playing this role in order to make the viewers enjoy the movie".

The story revolves around a group of otaku women who call themselves the "Amars"--- terrified of men, who live in an apartment called Amamizukan, where men are off limits. When the main character gets in trouble with a tropical fish shop one day, she is suddenly saved by a fashionable girl. This fashionable girl would start going to the apartment, but it turns out that this girl is actually a cross-dressed boy, as the story starts focusing on the development of their peculiar friendship.

The other wotas residing in the apartment will be played by Chizuru Ikewaki (Train-wota), Rina Ohta (Romance of the 3 kingdoms-wota), Tomoe Shinohara (Kare-sen; or wota of mature, old men) and Azusa Babazono (Japanese clothes-wota).

Taisuke Kawamura (Himitsu no Akko-chan, Nodame Cantabile the Final Score Part 2) will be calling the shots, as filming is scheduled to begin in May. 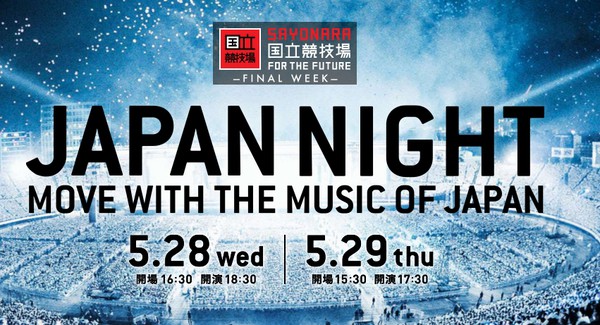 With plans already underway for a newly revamped National Olympic Stadium, the old stadium—the main site for the 1964 Summer Olympic Games—is scheduled to be demolished in 2015.

JAPAN NIGHT marks L'Arc-en-Ciel's third appearance at the stadium; they played there for the second time last month. Paul McCartney will play at the stadium next month on May 17 and 18 as part of his "Out There! Tour."

Although some anime fans might associate the 2020 Tokyo Olympics stadium with Katsuhiro Otomo's Akira, the new National Stadium won't look anything like the one seen in the film. Designed by architect Zaha Hadid, the new stadium will seat 80,000 guests and feature a retractable roof. Hadid was the first woman and the first Muslim to win the prestigious Pritzker Architecture Prize in 2004; she also designed the Aquatics Centre for the 2012 London Olympics.

Since the canceling of his other variety program, Yamashita has begun a new show called "Otona no Kiss Eigo" in which he attempts to pracitce/learn English. On the first episode of the show, Yamapi was introduced to a foreign girl from Australia. The two were shown a video of strangers being asked to kiss for the first time. They spoke completely in English for a while, then were instructed to kiss each other. Yamapi took the lead, kissing the girl twice. Afterwords, he revealed to his co-hosts that he actually fell for her. *cue jealous fan reaction LOL*

Yamapi was able to get by fairly well conversationally in English, but I wouldn't say he is completely fluent. Nonetheless I was surprised he was actually able to hold a conversation that well. We all know how other Johnny's do at English....