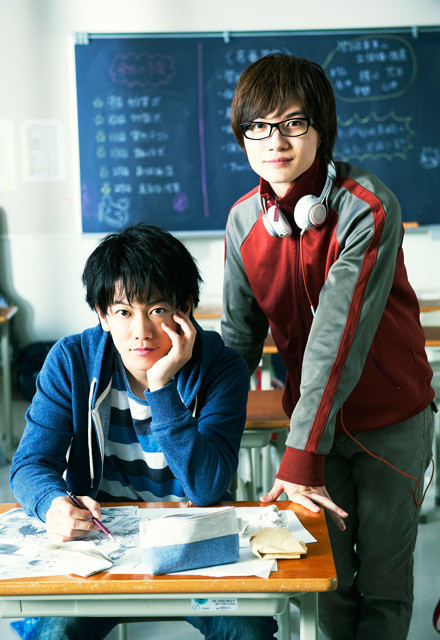 A live-action film adaptation of Ohba Tsugumi and Obata Takeshi 's Bakuman. manga has been green-lit for release in 2015.

Sato said that he wants to convey the history, present, and marvelousness of Japanese manga and "Japanimation" to the people of the world. Kamiki commented that he considers it an honor to be able to work on such a amazing story. He added that he himself loves the original manga.

One Hitoshi (Moteki, Koi no Uzu/The Vortex of Love) is directing the film. Obata emphasized that he is not just credited as a creator of the film's concept, but also as a staff member directly involved in the production. His own art will appear in the film as the various manga that Mashiro draws.

The two creators of Death Note serialized the Bakuman. manga in Shueisha's Weekly Shonen Jump magazine from 2008 to 2012, and Shueisha published over 15 million copies of the manga's 20 compiled volumes. The manga inspired three television anime series from 2010 to 2013. Viz Media publishes the manga in North America, and Media Blasters released part of the television anime on DVD in North America. The manga topped the Male category of the "Kono Manga ga Sugoi!" list in 2010.

---
I'm happy that these two are working together again but Takeru is such as strange choice as Saikou. lol Kamiki-bby, on the other hand, stay precious. Also, One Hitoshi! and they better not disappoint with the Niizuma Eiji casting.

Earlier today, there was Twitter buzz that a live-action adaptation of Bakuman, the manga about making manga, was filming in Hachioji. It didn't take long for this to become official with news that a live-action movie based on Tsugumi Ohba and Takeshi Obata's Shonen Jump series is planned for 2015.

Wow I love this cast. The anime/manga never interested me but I'm excited to see this!