AKB48 reveals the title to their upcoming single at handshake event 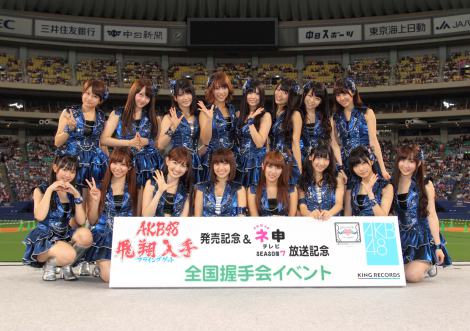 Popular idol group AKB48 held a handshake event at Nagoya Dome on September 4th, where they announced the title of their upcoming single. Scheduled to be available on October 26th, fans can look forward to “Kaze wa Fuiteiru.” The members told the 20,000 fans, “It will be a cool song, so please look forward to it, everyone.”

The handshake event was held for their latest single “Flying Get” which sold over one million copies on its release day. Member Oshima Yuko thanked fans, saying, “Thanks to you guys, we were able to get No.1 on the Oricon weekly ranking for nine consecutive works.”  Takahashi Minami also said, “I am very happy that many people are listening to this song. We, all the members, will try our hardest, so please continue to support us.”