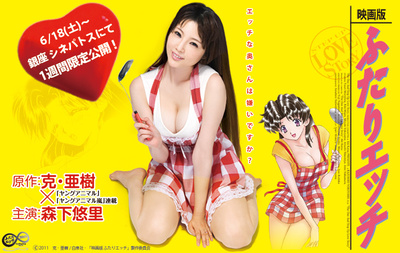 The staff and cast of the live-action film adaptation of Aki Katsu's Futari Ecchi (Futari H) romantic comedy manga announced on Sunday that a film sequel has been green-lit. The announcement was made at the event marking the release of the first film's DVD. The manga follows an inexperienced couple and their comic adventures as they explore intimacy with each other.


Yūri Morishita starred in the first live-action film as the wife Yura alongside Riki Miura (Here is Greenwood), and she appeared at Sunday event to announce that she will reprise her role in the sequel. The film will begin shooting in October.

Aki Katsu (Psychic Academy, The Vision of Escaflowne) has been drawing the manga, which describes itself as a "love bible" or a "user's manual" for people in love, in Young Animal and Young Animal Arashi since 1997. The manga has sold 23 million copies so far, and Hakusensha published the manga's 50th compiled book volume in Japan on July 15 with a Futari H Memorial Extra compilation DVD. Tokyopop published the manga in North America under the name Manga Sutra - Futari H before announcing that it would close its North American publishing operations.

baka_tenshi Re: forgive the ignorant prude here — 11th-Sep-2011 08:04 pm (UTC)
it's very ecchi (talking about sex and showing boobs) but from what i've read so far, it's not. maybe down the road they'll show the actual sex act but it seems to be more of a guide on how to have a relationship and that sex is not the foundation for a relationship.

keyllastic 11th-Sep-2011 08:37 pm (UTC)
Never heard of the live-action before, so I can't decide which is creepier, Riki Miura's appearance or the fact that the artist also drew Escaflowne............ Both details ruin my childhood somehow. :|

kuronochou 11th-Sep-2011 09:17 pm (UTC)
Aki Katsu (Psychic Academy, The Vision of Escaflowne)
O.O!!! whoa...
I've read this manga but it never crossed my mind that the mangaka is the same with Escaflowne (which I'm a huge fan of)!!!
(no subject) - Anonymous

heartgatavirus 12th-Sep-2011 03:43 am (UTC)
oh god. both main characters of this manga. are so unbelievably stupid and annoying D:
(no subject) -