One of the hottest things in Japan right now is the idol group AKB48. This army of teenage singers, besides experimenting with creepy, Frankenstein vocaloids, has taken the world by storm, topping Japanese pop charts for close to three years.

But are they more than just your run-of-the-mill idol group? Majirox reports that recently the group has pledged “idol diplomacy” to help with relations between Japan and China. Talk about going above and beyond the call of duty.

AKB48′s idol diplomacy raises a question: do Japan and China really need this extra attention to their foreign relations? Can’t they just get along?

Japan and China, while sharing very similar cultural roots and lots of language, haven’t always been on the best terms.

Discounting the hundreds and hundreds of years of battles between the two countries (because let’s face it: who wasn’t invaded by the Mongols?), the last hundred years of history between Japan and China have been especially tumultuous.

In the early 20th century, Japan pushed its influence across Asia occupying many countries, including China. Japan’s occupation brought with it destruction, death, and chaos. It was only with the combined power of Allied forces and Chinese rebels that Japan’s occupational government was forced out of mainland Asia.

But even in the Post-War era of peace, Japan and China haven’t eased up on their quarreling. China consistently takes issue with Japan’s Yaskuni Shrine, a Shinto shrine which houses the spirits of all of Japan’s war dead. In China’s eyes, any reverence to the war dead includes war criminals who ravaged China. Japan, on the other hands, sees praying at the shrine as a way to pay respects to all Japanese who died in the war.

Japan and China also have fought bitterly over a series of contested islands that sit between the two nations. This is despite the fact that these islands are mostly very small and sometimes even completely uninhabited.

The 3/11 earthquake and tsunami was an event so massive and devastating that even rivals like Japan and China set aside their differences to help rebuild. China, like many other countries helped Japan in its time of need by donating time, money, and effort into helping clean up the destruction.

Which leads me to the whole point of this post: AKB48. In order to thank the Chinese for their help during Japan’s trying times, the two countries organized Japan Shanghai Week 2011, a week in Shanghai when representatives from Japan could extend feelings of thanks and friendship with their neighbors to the west.

There were several different groups from Japan including businesses, cosplayers, and other organizations, but AKB48 was by far the most popular guest from Japan. Only AKB48′s appearance was so popular that it caused a security concern. People all over the world go nuts for AKB48.

Will a group of teenage idols succeed where generations of seasoned diplomats have failed? Doubtful, but they certainly will present a better face to the world than some politicians I know. 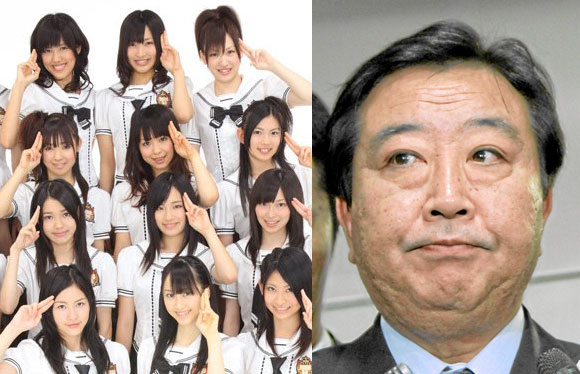 Realistically though, AKB48′s trip to China did about ten times more to promote the idol group than it did to ease relations between two neighboring countries. But I know one thing for sure: watching AKB48 videos make me feel like a dirty old man.