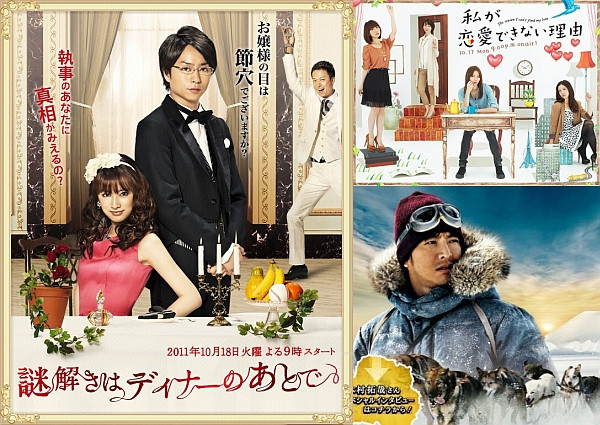 The drama fall season is slowly approaching and the first new shows have already started this week, so it’s the perfect time for Oricon to reveal the results of their regular, ‘Which drama do you anticipate the most?‘, ranking which is conducted before every new season.

Oricon surveyed 1,000 men and women from their teens to their forties in order to find out which dramas they are excited for. This season it seems like most people are looking forward to Sakurai Sho (Arashi) playing a butler with a wicked tongue in the drama “Nazotoki wa Dinner no Ato de” (Fuji TV), while Fuji TV’s Monday drama about loveless women, “Watashi ga Renai Dekinai Riyuu“, ranked second, followed by Kimura Takuya freezing yet heartwarming “Nankyoku Tairiku” (TBS).

Normally you’d expect Kimura’s upcoming drama to be first, but this time the ’slightly crumbling drama legend’ had to accept defeat against the popularity of Arashi and the novel, “Nazotoki wa Dinner no Ato de” which it’s based on. Of course this doesn’t say anything about the actual outcome at the end of the season, but the viewers are hyped for the butler detective. Let’s wait and see how this rather fresh take on the detective/mystery genre, with actress Kitagawa Keiko starring alongside Sakurai Sho, is going to score in terms of ratings.

“Watashi ga Renai Dekinai Riyuu“, starring Karina, Yoshitaka Yuriko, and Oshima Yuko (AKB48), is somewhat being promoted as the ‘Japanese Sex and the City’ and could, if done right throughout the first two-three episodes, become quite a success for Fuji TV and their Monday drama (‘Getsu9′) time slot. Many young Japanese women can’t wait to watch this drama. One Japanese woman commented, “This might become the drama I can sympathize with the most and I’m going to look forward to every single episode until the end!” However, men can also can relate to the drama’s topic and commented, “I might be able to apply the things from the drama to myself.”

In third place, we have the big-budget production of TBS “Nankyoku Tairiku“, starring Kimura Takuya, that depicts the events of the first Japanese antarctic explorations and the deep bonds that emerged between the exploration team and the Sakhalin huskies. One man commented, “The cast, the story, the scale, everything about it is epic. It could easily become one of the most fascinating dramas.” Another one said, “I’m kind of expecting it to look and feel more like a movie than a drama.” The most difficult challenge for this drama will be to maintain its fascination and its epic feeling throughout the whole season.

You can check out the full ranking below!

Which fall drama do you anticipate the most? (men+women)

Which fall drama do you anticipate the most? (just men)

Which fall drama do you anticipate the most? (just women)