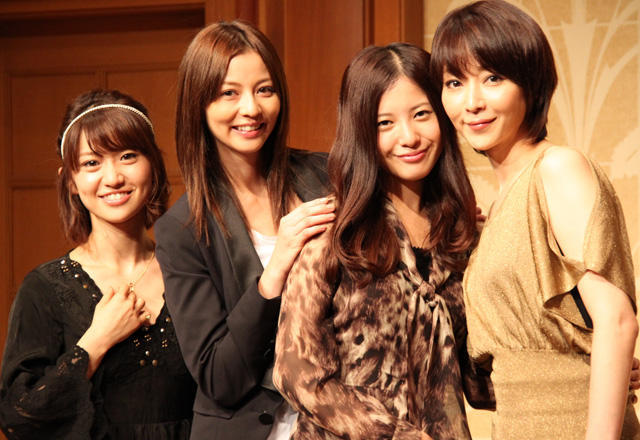 The network describes the drama as the most unique, true-to-life love story in the history of Monday 9pm (‘Getsu9′) dramas. It depicts the lives of different young women, who have a negative attitude towards love. They went for a sociological and very realistic approach while exploring the various reasons that make women to adopt such an attitude.

Karina, plays a very frank young woman named ‘Fujii Emi‘, who neither really cares about her works at an illumination company nor anything else in her life, loved watching ‘Getsu9′ dramas during her student days, but now she actually gets to star in one. She commented, “I can feel the pressure from all sides, but I’d like to calmly overcome the pressure together with all the other actors.”

In response, Yoshitaka, who plays a hostess and Emi’s junior from senior high school called ‘Ogura Saki‘, used some of her peculiar expressions to describe the personality of Karina. She said, “I always thought that she has a nice frank image, but what most people don’t know, she actually has a very feminine side. That side of her makes you think, ‘Waah, she’s so lovely!’ There is that kindness that you wouldn’t know as a first-time customer. First-time customers are not allowed!”

Oshima smiled in agreement and added, “She’s a really kind and handsome woman. Recently she found out how to handle me properly with a carrot and a stick.”

Even Inamori couldn’t refrain from praising Karina and said, “She truly is a gentle and caring woman.”

An astrologer attended the press conference as a special guest and analyzed the philosophy of love of the four actresses and realized that their results perfectly match with those of the characters they are playing in the drama. Karina agreed, “He’s not wrong!“, while Yoshitaka couldn’t hide her amazement and said, “It’s so close (to my character), it sounds like a setup!”