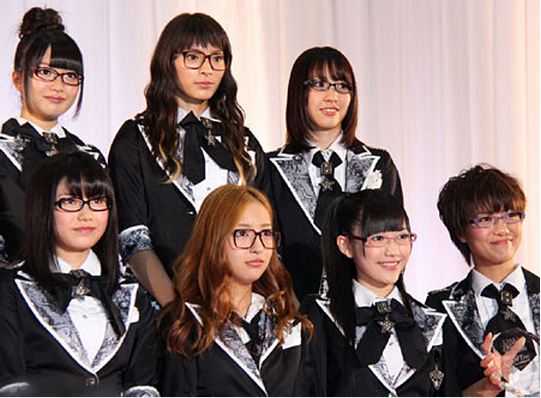 On October 11th, idol group AKB48 received a special award for the ”24th Japan Best Dressed Eyes Awards“, which declared that AKB48 were the celebrities that people most wanted to see wearing eyeglasses.

Eight members from the group were chosen as “Megane Senbatsu” (members who suit glasses the most), and they received the award on behalf of their group.  The “Megane Senbatsu”members were Akimoto Sayaka, Itano Tomomi, Kasai Tomomi, Kitahara Rie, Fujie Rena, Miyazawa Sae, Yokoyama Yui, and Watanabe Mayu. Kasai was absent from the event due to poor health.

As the representative of AKB48, Miyazawa expressed her joy saying, “In the past, Akimoto Yasushi-sensei has  been awarded best dresser. When we think of Akimoto-sensei, we think of ‘glasses’. So we want to aim to be an idol group that when people think of glasses, they can associate it with AKB48.”

Itano, who is a regular contacts user, said that she has recently been wearing glasses. “I don’t have an intellectual image, so I’m happy,” she said.

Meanwhile, Watanabe shared, “I’ve been wearing red glasses since long ago, so I was very happy to receive pink ones this time. My repetoire has expanded.” Also, Miyazawa stated, “Since I was in middle school, I loved glasses so much that I wore them just for show. Thank you for putting me into ‘Megane Senbatsu’!”

The awards ceremony was held as a part of the “24th Glasses International Exhibition (IOFT2011)“, which will run until October 13th. The exhibition brought in 550 companies from 20 countries all over the world. In honor of their award, AKB48 will promote glasses as an item to support each person’s personality.