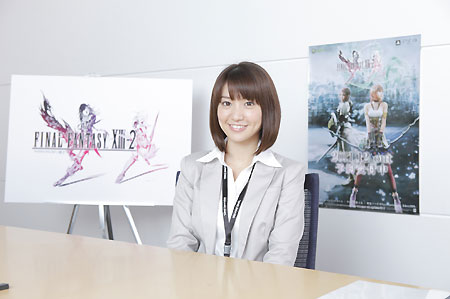 AKB48’s Oshima Yuko has officially become one of many beta testers for the upcoming Square Enix game, “Final Fantasy XIII-2“. She is also the new face of the FFXIII-2 commercial, which will start airing on October 15th (JST).

Oshima entered the Square Enix building in a gray pants-suit and was handed an official name card and a “FF13-2 Development ROM“.

The AKB48 idol professed that she’s a huge fan of the Final Fantasy series, and was honored to be one of 13 official beta-testers, who go by the name ‘Judge XIII‘. She also wrote in a manifest that they, ‘Judge XIII’, will write their honest thoughts and reviews of the game as they go through it.

A campaign site will be established for ‘Judge XIII’, and if enough fans “like” the website, Oshima will cosplay as a character and hold an event with the company.