Shaku Yumiko mistakenly buys an iPod Touch instead of an iPhone 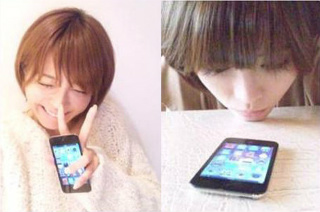 Talento Shaku Yumiko cracked up her fans after she revealed that she accidentally bought an iPod Touch instead of an iPhone.

On October 18th, the star blogged her excitement about buying an “iPhone” by writing, “Finally! I made my official smartphone debut!” She continued, “I remembered a famous saying that goes ‘Kaitai toki wa kaikae doki’ (The time to buy is the time to change), so I made up my mind. I usually see people playing with it on the train — the technique of the smooth ninja thumb~ I’m so cool…”

Once she received it however, Shaku’s excitement quickly turned into disappointment.

“Yesterday, I happily showed off my new iPhone, but it seems this is an iPhone touch,” she said.

Shaku adorably warned her fans against making the same mistake. “The appearance is confusing and complex, so for those of you who are considering getting an iPhone, please be careful not to make that mistake.”