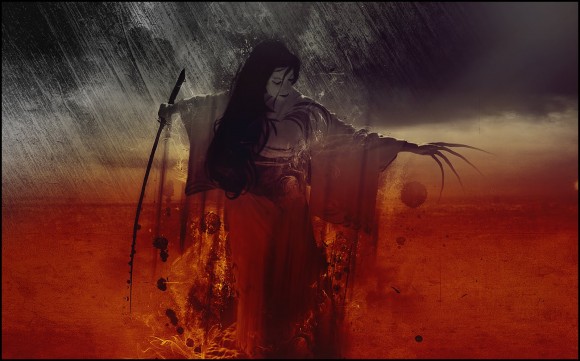 Japanese folklore has a rich and terrifying tradition of all sorts of zany ghosts, ghouls, monsters, and goblins. Japanese ghosts collectively known as yūrei (幽霊), and Japanese monsters collectively known as yōkai (妖怪) are arguably the most popular. But how many traditional Japanese spooks do you actually know anything about? Read on to see what you should really be afraid of this Halloween. 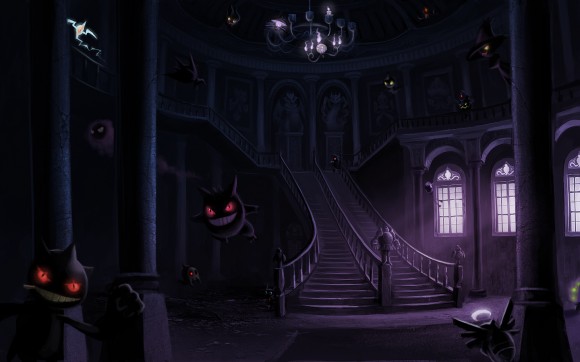 Traditional Japanese beliefs state that every human being has a soul called a reikon (霊魂). After death, the reikon exits the body and enters a temporal stage where it waits for the living to perform final rites and funeral rituals for them. If these are completed properly, the reikon is satisfied and it can be at peace in death, leaving spiritual limbo and continuing on to the afterlife. This sort of reikon will become a spiritual protector of its family, looking down on its ancestors with favor.

However, if a person dies an unnatural, traumatic death, or if their final rites aren’t properly performed, the reikon becomes a yūrei and starts wreaking havoc on everyone’s sanity. The yūrei wallows in temporal space, forever yearning for whatever needs to be done for it to finally achieve peace in the afterlife. If the yūrei has strong enough emotional ties to the physical world however, it can return as a ghost. A scary ghost. One that’s sure to give you the heebie-jeebies.

These ghosts dwell on Earth, haunting its fleshy inhabitants. While all Japanese ghosts are referred to as yūrei, there are a handful of specific types differentiated mostly by the circumstances surrounding their death. 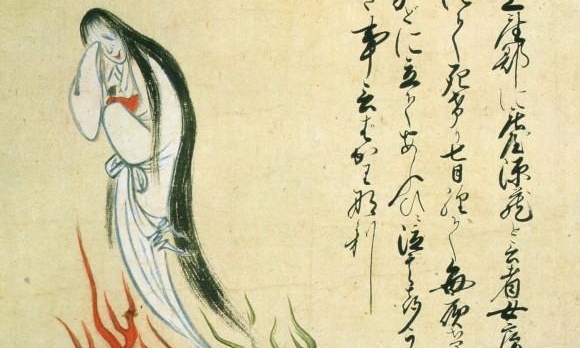 Onryō are female ghosts who were abused or neglected by their lovers in life. These ghosts dwell in the physical world seeking vengeance on those who wronged them. Strangely enough though, they rarely do actual harm to the lovers who hurt them. They are also the most common type of ghost seen in Japanese horror films. In the case of onryō, the emotions tying them to the land of the living are usually hatred or sorrow- sometimes both. So if you’re in Japan, be sure to not piss off any ladies because they might come back as onryō and ruin your life. 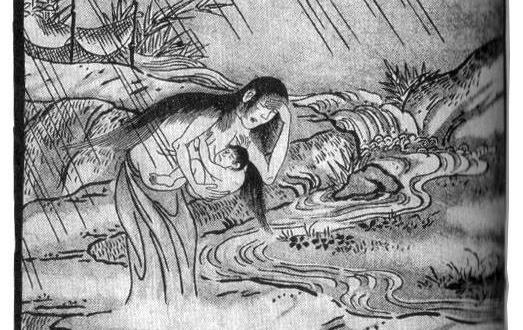 Women who die in childbirth or without providing for their children before death are classified as ubume. The power of their motherly love allows them to remain in the physical world to attempt to help the children they failed in life. Usually they come back to help their child in a time of need or leave gifts for them mysteriously. A mother’s duty is very important in Japan, and the stories of ubume are many.

Appearing in the form common to most Japanese ghosts, ubume are clad in robes of white, have long, unbound, disheveled hair, and are creepier than your perverted uncle Mike. Given their grim origins, the stories revolving around ubume are more sorrowful than those of onryō and focus mainly on the mother’s quest to ensure her child’s continued safety.

There’s no haunting to be had in these stories; the mother’s spirit directly interacts with her child after death, serving as a sort of guardian angel. However, in her providing for the child, the mother inadvertently leaves clues that otherworldly devices are at work. The most common sign are coins and gifts left for the child that turn into dead leaves after they’ve been discovered. Worst. Birthday. Ever. 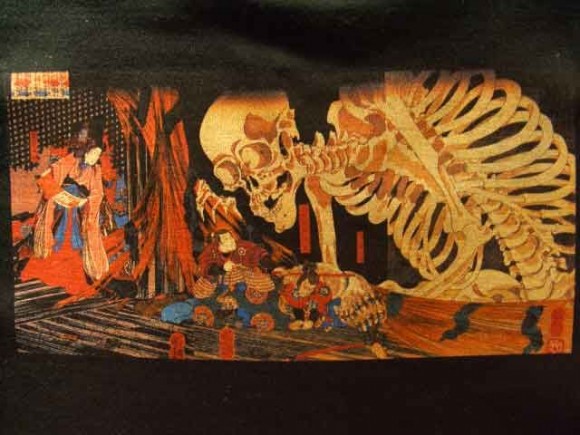 Goryō are malicious, vengeful spirits – martyred in life and returning for revenge in the form of widespread death and destruction. Usually these spirits were those of the ruling class (the more powerful the person, the more powerful the spirit). Out of all the yūrei, goryō are undoubtedly the most dangerous. They can be incredibly powerful. They are capable of everything from destroying crops to evoking widespread natural disasters.

In medieval Japan, it was a common belief that one’s social status carried over with them into the spirit world so goryō were almost always spirits of the aristocracy. The more powerful someone was, the more likely they would return as a ghost capable of great destruction, so naturally respecting the dead was very important. On the other hand, if some jerk assassinates you for no good reason, it doesn’t really matter if there’s a shrine built in your honor because you’re going to be mighty peeved regardless.

Goryō are vengeance ghosts similar to onryō. However, their destructive ways didn’t necessarily end with the death of those who had wronged them. Only the super-cool-mountain-powered yamabushi could put these spirits to rest for good. 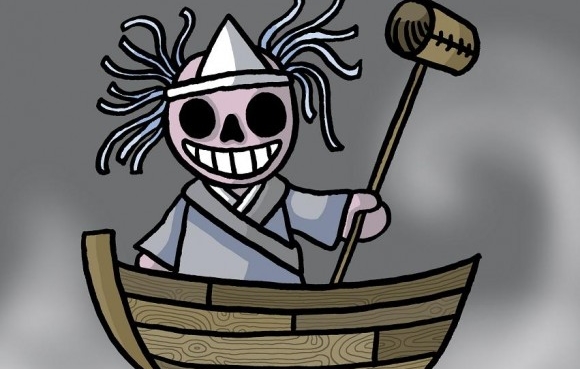 Funayūrei (ship ghosts) are the ghosts of those who died at sea. They approach seafaring vessels and ask for a bucket or a ladle. If they are given one of these they will deviously scoop water into the ship so efficiently that it will sink (so if you’re driving a big boat, you’ll probably have the time to get to land first, I think).

Funayūrei are usually not the end result of military conflict at sea, however (those who die in battle or on a battlefield are considered separate spirits all their own). Just about any sort of general drowning will do the trick here. They’re simply upset that they died, and now they want to take everyone down with them. Hey, you’d be bummed out too if you drowned in a big puddle.

Their ghost ship will linger by the coast, waiting for fishing vessels to victimize. As one passes by, the ghost crew cries for help in repairing their woefully sinking ship. But if the passing fisherman are nice enough to help out the spirits, they’re screwed. What sort of ghost punishes those who are kind to them? A lousy one.

If the funayūrei are given a bucket or a ladle they will immediately use it to fill the fishing vessel with water and kill all those on board, ultimately creating more funayūrei and ruining a perfectly good boat. Funayūrei sound like a bunch of jerks to me. I don’t like ‘em.

Funayūrei are believed to look human, however some are said to take on a scaly sea-like appearance much like those under Davy Jones’ command. So much for helping out your fellow man at sea, eh? 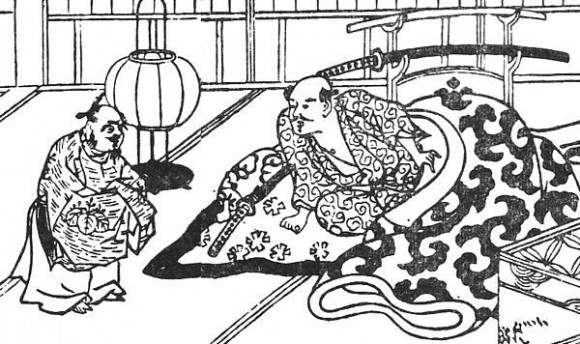 Zashiki-warashi are child ghosts who dwell in large, well maintained, fancy houses. They’re a squirrely bunch and really enjoy playing pranks on their fleshy housemates. However, seeing a zashiki-warashi or having one in your home is considered very lucky and can even bring fantastical fortunes.

These spirits usually appear as five or six year old children with bobbed hair and red faces. Zashiki-warashi are unique in the fact that they aren’t hell-bent on murdering everyone or seeking vengeance on those who wronged them. Instead, these ghosts just act like trouble-making kids. They’re brats, but at least they aren’t trying to drown you, right?

Once they’ve decided to haunt your home, they will demand your attention much like any bratty child would. If you choose to ignore the spirit, it will then begin to play increasingly devilish pranks on you until you acknowledge its presence. If you still don’t learn to love your forcibly adopted ghost-child, it will cry its little ghost eyes out and run away from home forever. Congratulations. You’ve failed as a ghost parent. When you die you’ll become an ubume for sure.

Despite their somewhat annoying nature, zashiki-warashi are considered lucky and are capable of bringing riches to those whose homes they inhabit. Should the family successfully adopt and care for the ghost child, they will be rewarded financially. But keep in mind, these kids are no angels. If you want those riches, you’re gonna have to work for ‘em, girl. 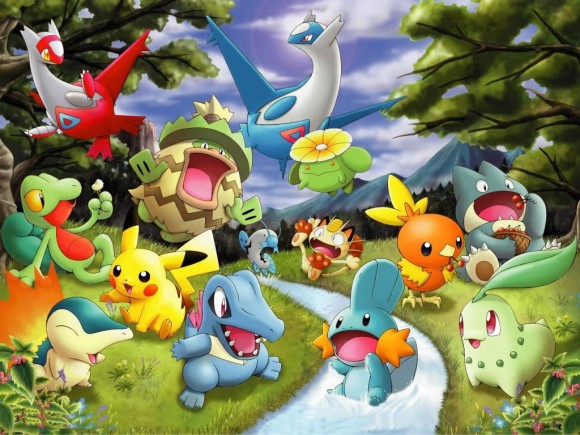 From the beginning of time, Japanese artwork and folklore has been littered with a baffling amount of unique goblins, ghouls, beasts, and demons. Known collectively as yōkai, these mythical monsters come in hundreds of recognized species complete with back stories, detailed strengths, weaknesses, hobbies, and favorite members of AKB48. A handful of the most famous and widely recognized yōkai are detailed below for your enjoyment. 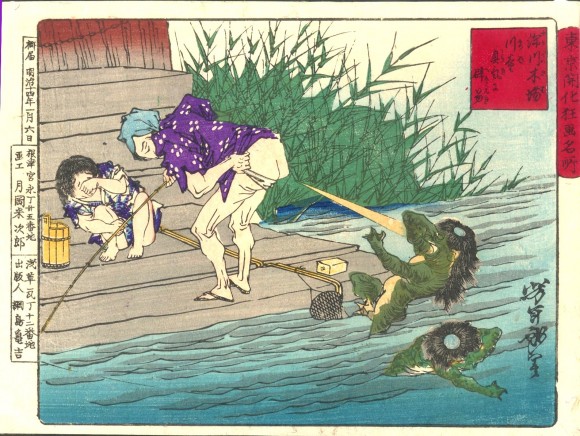 The kappa is easily one of the most famous creatures to come out of Japan. This angsty aquatic monster is a fusion of duck, frog, and turtle. By their powers combined, a kappa is born. A small pool of water atop the kappa’s head is its only means of functioning on land, and they have an unhealthy obsession with cucumbers. Why they like them so much I do not know.

Nowadays the kappa is loved by many and drawn up to be cute and marketable (even Hello Kitty has one among her diverse group of pals). In days past, however, the kappa was used by parents for psychological warfare against their children. Japanese tykes were warned that if they took a swim without adult supervision, a kappa would sneak up beneath them and suck out their insides through their anus like a hot bowl of ramen noodles. I’m serious. If you don’t believe me, just look at the above picture one more time. Go ahead. Look at it. 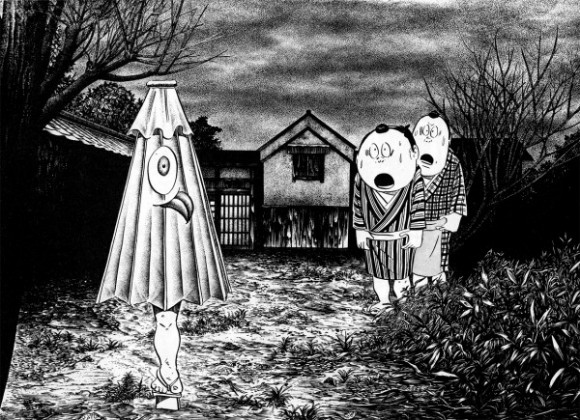 Tsukumo-gami is a yōkai subcategory comprised of inanimate objects that have sprung to life. Two of the most well-known tsukomo-gami are the Karakasa (umbrella ghost) and the Chochinobake (lantern ghost), but virtually any object is capable of transforming into a yōkai. The chances of this happening were said to increase with the object’s age, peaking around the 100 year mark. It was also essential that the object be somehow agitated. Most commonly this would be a result of abuse, neglect, or abandonment. Just remember that the next time you think about throwing your XBOX controller across the room in frustration, k? 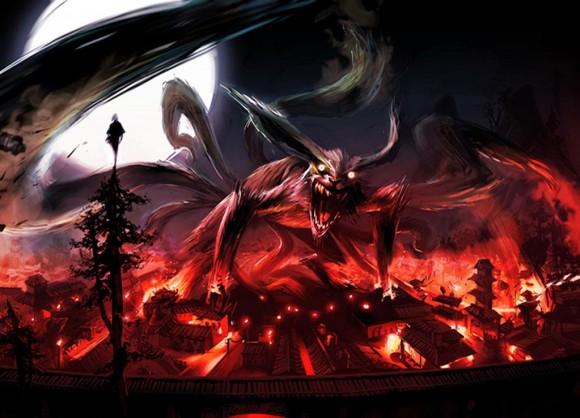 We talked about kitsune before in an earlier post (check it out!) so I won’t go into too much detail here.

Stories depict kitsune as intelligent beings possessing magical abilities that increase with their age and wisdom. The most notable of these abilities is their adaptability to human form. While some folktales speak of kitsune employing this skill to trick folks, other stories portray them as faithful guardians, friends, lovers, and wives.

Foxes were a popular pet in ancient Japan and this gave rise to many a legend concerning them. Kitsune became closely associated with the Shinto spirit known as Inari, and served as its messengers. This role reinforced the fox’s already supernatural significance.

The more tails a kitsune has (up to nine) the older, wiser, and more powerful it is. Because of their potential power and influence, some people also make offerings to them as to a deity (much like weeaboos worship Naruto). 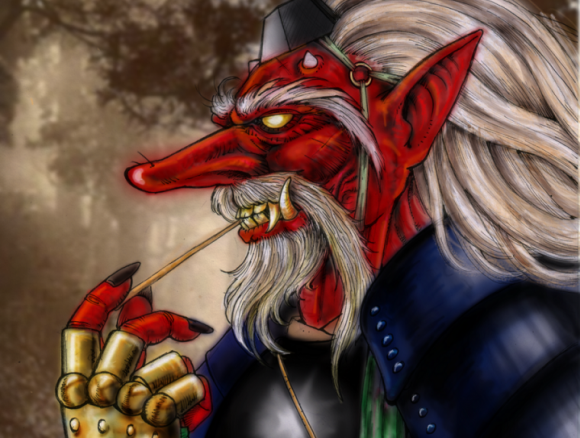 Tengu are incredibly popular supernatural creatures found in Japanese folklore, art, theater, and literature. They also continue to make appearances in present day media such as anime and movies. Tengu are one of the best known yōkai and are sometimes worshiped as Shinto kami. Although their name comes from a dog-like Chinese demon (Tiangou), the tengu were originally thought to be birdlike, and they are traditionally depicted with both human and avian characteristics.

The earliest tengu were pictured with beaks, but this feature has since modernized into an unnaturally long nose (did you know that Pinocchio is actually a tengu?!?!), which is undoubtedly their defining characteristic today.

Buddhist dogma long held that the tengu were disruptive demons who brought both violence and death. However, their image gradually softened into protective, if still dangerous, spirits of the mountains and forests. Tengu are also associated with the practice of Shugendō, and they are usually depicted in the distinctive garb of its followers, the yamabushi. 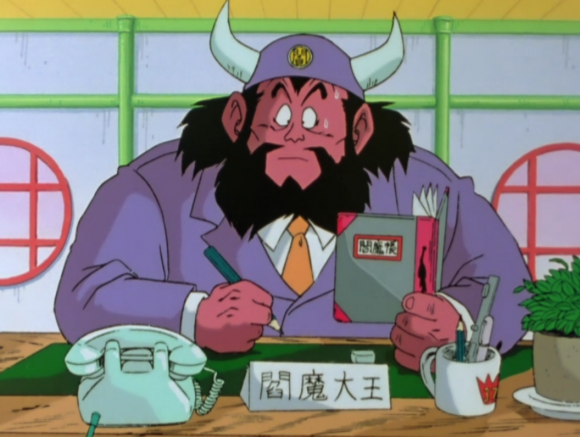 Enma Daiō is the Japanese lord of death. He’s so popular they even let him on a TV show called Dragon Ball Z. What more do you need to know?

Other Popular Demons Worth Checking Out 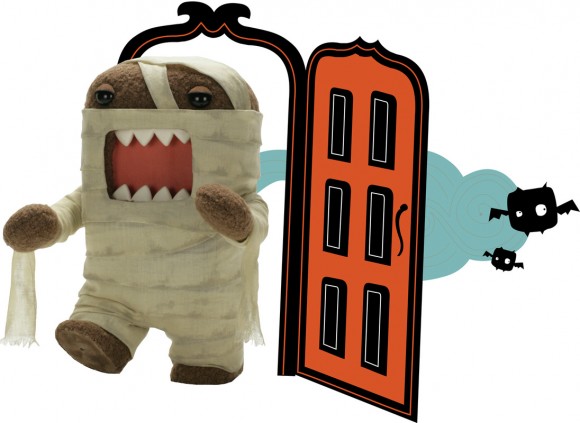 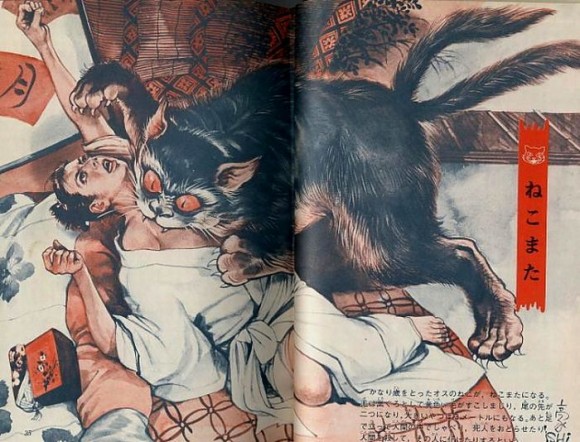 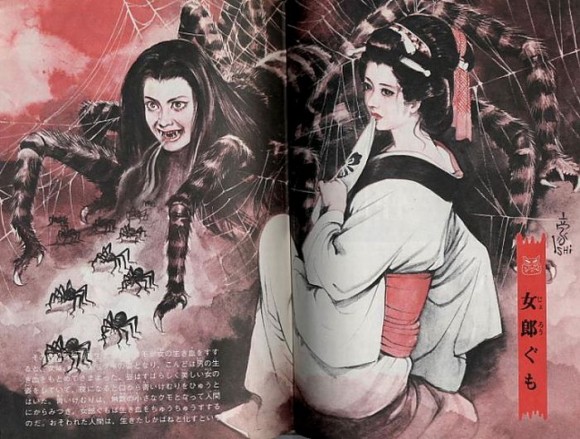 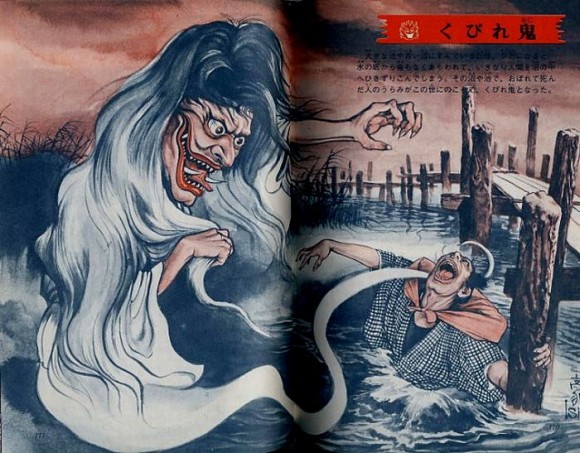 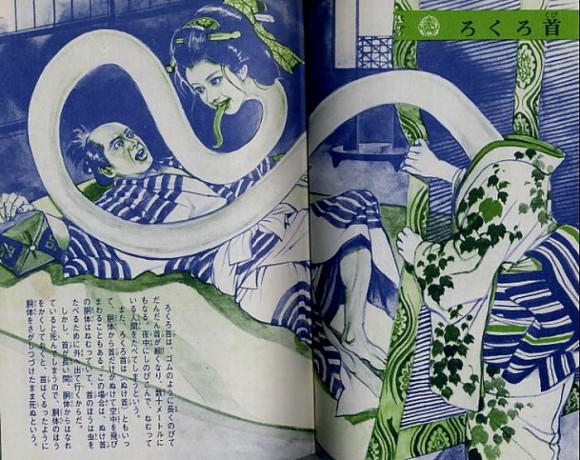 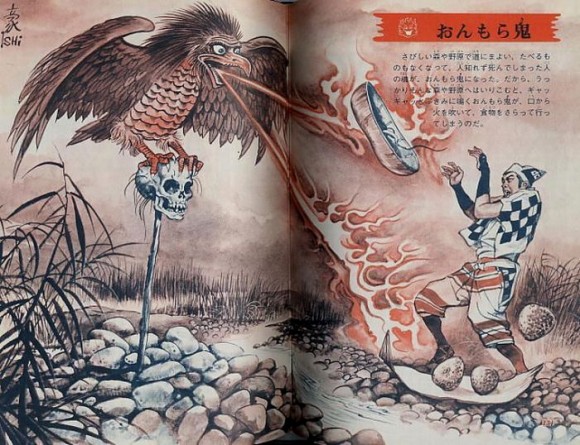 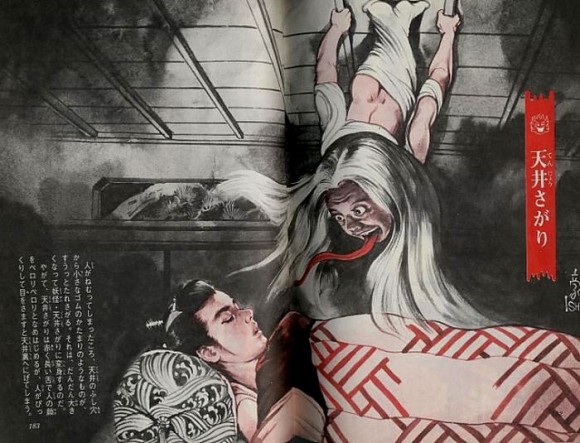 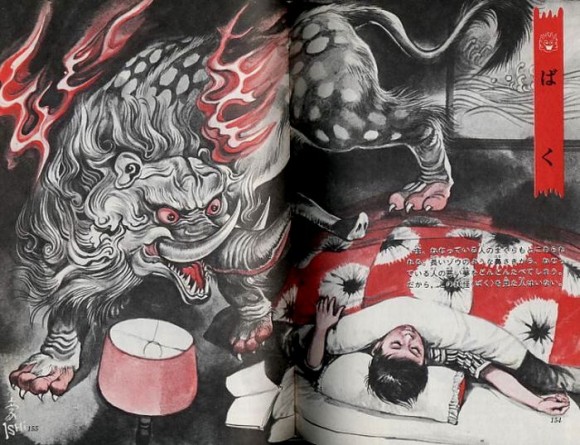 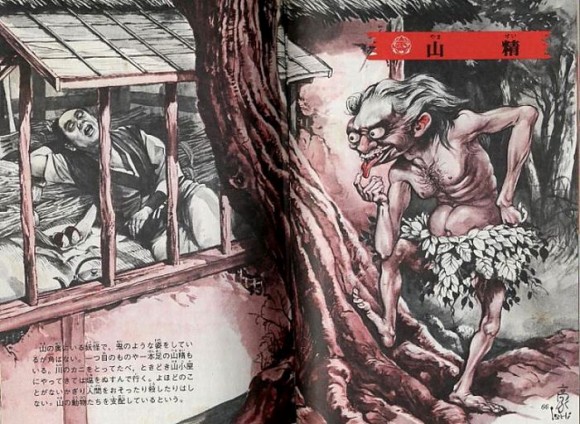 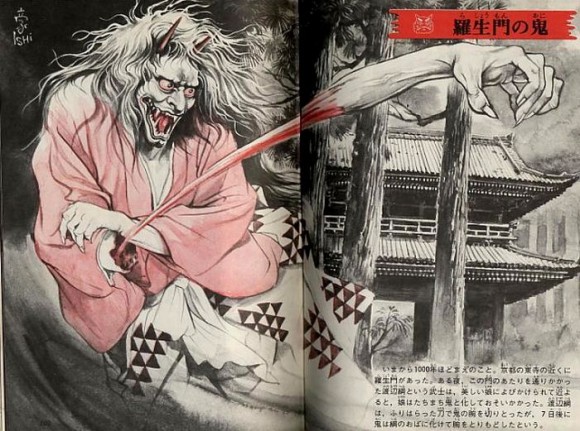 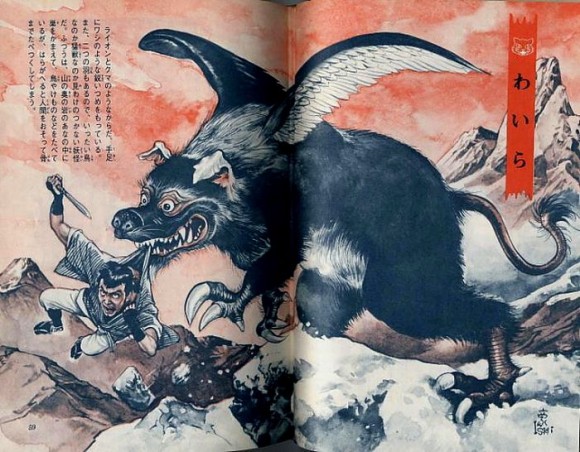