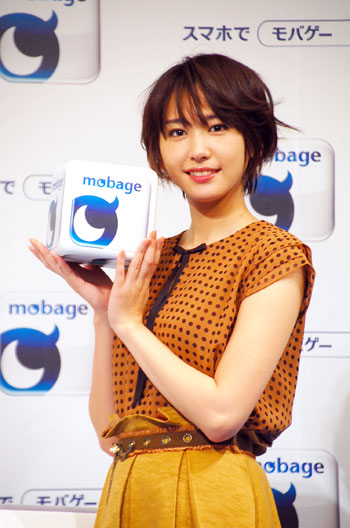 Actress Aragaki Yui has been appointed as the new CM character for the mobile social network ‘Mobage‘ and attended a PR event to introduce the CM on Tuesday.

For the CM, Aragaki, who is sporting a new short hairdo since the filming of “Ranma 1/2“, was put in a vast and empty studio, where she had to follow the instructions given by the director through a speaker. While following his instructions and playing the game, she was filmed by thirteen different cameras.

She looked back and commented, “It was a strange feeling of not knowing where you are. What surprised me a little, was the fact that the staff only told me to enter the studio and play the game (on Mobage). The studio was way too quiet and scary.” Further she added, “It was an exciting experience, because it all felt like an observation.”