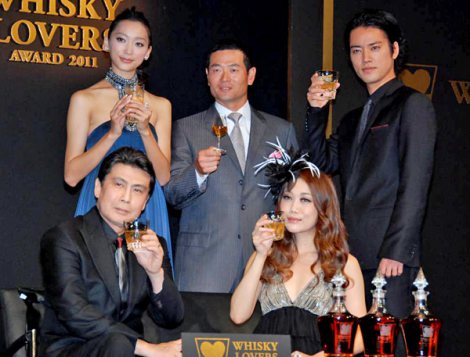 On November 9th, model/actress Anne and actor Kiritani Kenta received the ‘Whiskey Lovers Award‘ at a ceremony in Tokyo.

The two of them were chosen as the two ‘New Whiskey Lovers‘, representing young stars that are expected to ‘mature’ towards a great future, just like good whiskey.

Anne commented while receiving the award, “With this I’ve finally joined the group of adults. From now on I’d like to deepen my knowledge about and love for whiskey even further, and enjoy my life with whiskey.”

Kiritani was delighted as well and said, “By receiving this wonderful award, it feels like I’ve finally become an adult. I’d like to show this award to myself during my early twenties, when I was out of money and spent drinking pure whiskey at a bar for two hours.”

His love for whiskey was evident, as seen by his long glances at the glass of expensive 50-year-old Yamazaki whiskey in his hand. He cradled the drink in his hand instead of tasting it, which caused host/singer JUJU to chide, “Stop it! It makes you look scary and haughty!”

Calmly enjoying the aroma of the whisky, Kiritani replied, “You don’t often get the chance to drink such a whiskey.” After finally tasting the Yamazaki, he was even more excited and commented, “This is incredible! I’ve never tasted such a flavor before!”

Anne, who is said to have become a whiskey lover after turning 20, also revealed what snacks she likes to have with a glass of whiskey. She said, “Sweet cake, smoked food, fruits… Whenever I buy a delicious cake, I feel like opening a bottle of whiskey.”

Singer JUJU and baseball commentator Kuwata Masumi were chosen as the new image leaders for whiskey in general and received the ‘Best Whiskey Lover‘ award. Another special award, the ‘Whiskey Master’, was given to kabuki actor Matsumoto Koshiro.