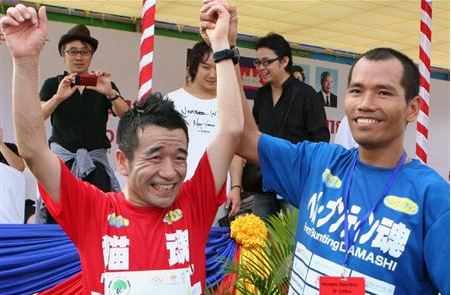 It’s been announced that talento Neko Hiroshi acquired Cambodian citizenship and that he’ll be representing the country in the men’s marathon for the Southeast Asian Games.

The Southeast Asian Games will be held on November 16th at Palembang, Indonesia. If Neko places first amongst other Cambodian athletes, he will receive a ticket to the 2012 London Olympics.

Neko ran his first full marathon back in 2008 and improved his time by 20 minutes each year. In this year’s Tokyo Marathon, he completed the race in 2 hours and 37 seconds. After placing 3rd in Cambodia’s half-marathon last December, Neko had been aiming to obtain citizenship in Cambodia with the support of the country’s Olympics committee.

Through his agency, Neko commented, “I will do my best as a representative of Cambodia.”