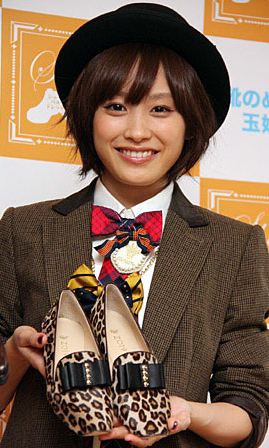 Takahashi expressed her joy saying, “I never dreamed of receiving such a wonderful award after graduating from Morning Musume. I love fashion, and I love to collect shoes, so I am very happy.”

Along with the award, Takahashi received two pairs of shoes that were order made to match her taste. She smiled as she said, “Wow, it’s cute,” and continued “It’s so cute that I honestly expressed my happiness. I am very happy. I want to wear it already.”

Sponsored by ‘Kutsu no Megumi Matsuri Committee’, the ‘Best Shoe Wearer Awards’ aims to stimulate leather related industries by awarding the person who suits shoes the most. Previous winners of this award include Ishida Junichi (2008, 2009), Kanda Uno (2009), Yashiro Hideki (2010), and Tamaru Maki (2010).

During a press conference after the ceremony, Takahashi was questioned about relationships and marriage. She answered, “Since I graduated, I’ll probably get married if I meet somebody. I think my desire for marriage come will after I find a partner.” In response, Kuraishi blurted, “I want you have an early marriage, have children, and contribute to Japan.”