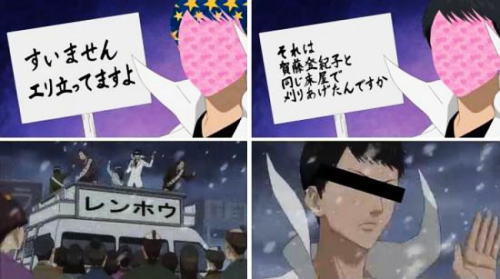 The Mainichi Shimbun paper reported on Thursday that a Gintama' anime episode was not re-aired after TV Tokyo was contacted by a representative due to alleged defamation. Before the Mainichi article, there were conflicting reports about whether a complaint was made.

The anime channel AT-X announced on November 11 that its showings of Gintama' episode 232 were cancelled at the request of its parent company, TV Tokyo. The episode had already aired on TV Tokyo on October 31, and the episode is still streaming overseas on the Crunchyroll service.

According to Mainichi, the episode had a defamatory depiction of a character associated with a specific individual or individuals, and TV Tokyo was contacted after the initial broadcast by a representative of the affected party. After confirming the content in the episode, TV Tokyo decided to cancel its re-airing on AT-X. Mainichi quoted TV Tokyo, "We have no problem with parodying a specific person, but we decided to cancel [the re-airing] since it defamed a person's character."

Gintama' supervisor Shinji Takamatsu emphasized last Friday that Advertising Council Japan, outspoken Tokyo Governor Shintaro Ishihara, and singer Tokiko Kato (Porco Rosso) did not complain or protest to TV Tokyo. He also noted that a representative of Renhō Murata, the current Minister for Government Revitalisation, said, "It is not true that we objected." He added that the decision on whether to release the episode on DVD has yet to be made.