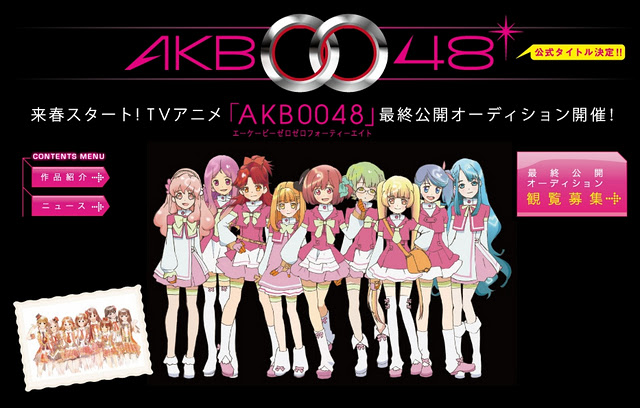 Earlier, we reported that popular idol group AKB48 would be getting their first anime series next spring. At the time, the title wasn’t revealed, but now sources have confirmed that the series will be called “AKB0048“.

AKBoo48’s story revolves around 9 idol cadets who aim to be ‘legendary idols’. The voice cast for the 9 girls yet to be finalized, but auditions will involve 200 girls from AKB48, SKE48, NMB48, and HKT48. Out of those 200, 30 will pass the first round, the results for which will be announced on December 2nd through a special website.

Those 30 girls will then participate in a public audition, to be held on December 13th. Fans who want to be at the final round can apply through the anime’s official website, and a lottery will determine who gets to join the lucky audience of 100.

Furthermore, AKB0048 will be getting a spin-off manga before its anime broadcast. It will start its serialization in February’s issues of “Nakayoshi“, “Bessatsu Friend“, and “Magazine Special” No. 2, as well as the March issue of “Bessatsu Sounen Magazine “.