AKB48 celebrates their 6th year at the AKB48 theater 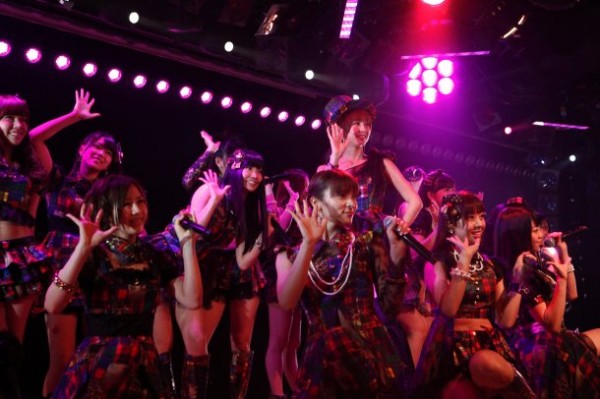 On December 8th, AKB48 held a performance at their theater in Akihabara in commemoration of their 6th anniversary.

The first generation members (later known as Team A) started off on that same stage as AKB48 on December 8, 2005. With 6 years passing, Team A, Team K, Team B, Team 4, and the research students all stood on stage and performed; totaling around 70 people. This performance was also the debut of the 13th generation research students, which surprised the fans at the theater.

After the performance various members left their thoughts and impressions on their blogs. Maeda Atsuko wrote about her hopes for their 7th year, “We’ve really increased our number of members, so we’ve become a big family now (*^^*)” “I’ll do my best to work carefully so we can stand here and advance (into our 7th year). Please look after AKB48 in our 7th year as well ♪♪”

Oshima Yuko, 2nd generation member (later known as Team K) who debuted in April 2006, declared, “I was able to see our 6th anniversary that’s felt so far away. I never imagined I would feel this… Again, I want to brace myself and work hard to build up AKB!!!!!! We still have more to go~”.

3rd generation member (later known as Team B) Kashiwagi Yuki commented, “Starting with the fans, I will never forget my gratitude to all of you for supporting AKB!! I hope we can swiftly run into our 7th year.”