Is America The Nation of Sushi Abomination?

'Sushi. That delicious Japanese food that everyone seems to love. Call this post a rant if you want, but everyone is doing it wrong. I believe in sushi purity, where no other sushi is allowed to exist in my extremely racist one-sushi world. But seriously though, Americans ruin all ethnic foods. Taco Bell? Happy Teriyaki? Olive Garden!!? The list goes on and on. Sushi, too, is being ruined. We are the nation of Sushi Abominations. This will not stand. Allow yourself to be educated (in case you’re the type of person who thinks Taco Bell is traditional Mexican food). 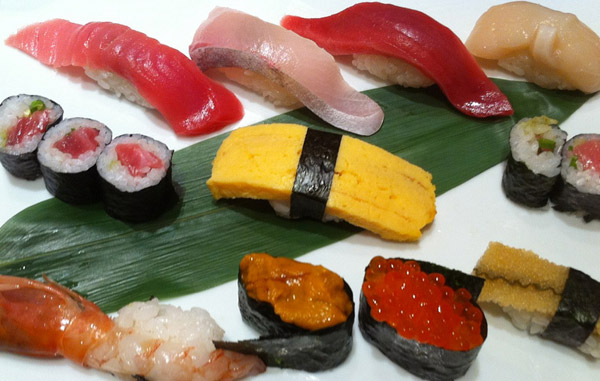 First we have to find out what sushi is before I can tell you what sushi isn’t. Sushi is made with rice with vinegar in it, and can be put together in a variety of ways. There are a lot, but the main ones are…

There are others, but that’ll get you the main picture. Originally, sushi came from something known as narezushi, which is basically a form of pickled fish (convenient because it could last up to six months, yum!). This developed into oshizushi, which is a kind of pressed sushi where rice and fish were squished together in a rectangular mold. 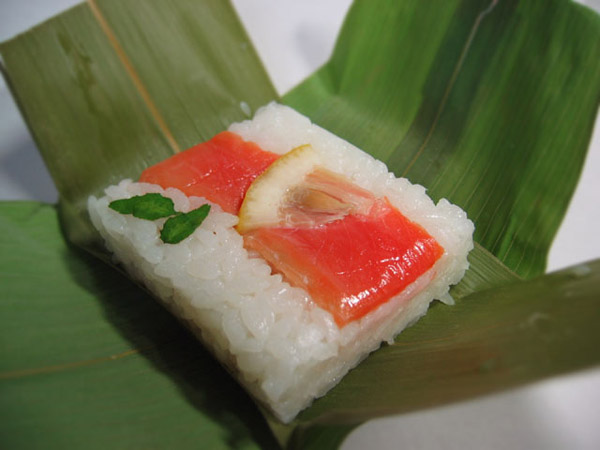 From there, sushi became smaller and much more efficient (just like most Japanese products) and turned into nigirizushi, which is basically what we see today. Definitely went through an evolution of sorts to get to where it is today…

But that’s where the problems start. This is like the movie Gattaca. Sushi was fine before it came to America. It was walking along on natural evolutionary progression. Then America was like… oh hey! Let’s change it! Let’s genetically alter the sushi and create a “perfect” sushi. Perfect? PShhdKLJFSLFdkd. You’re DESTROYING SOCIETY SLOWLY WHILE YOU THINK YOU’RE IMPROVING IT. OPEN YOUR 20-20 VISION EYES.

So what are these genetically altered sushi? These unnatural sushi? Let me tell you.

There are some small abominations, but I won’t list them here. You can list them in the comments, if you want. Here I’m going to reveal to you the heavy hitters. These terrible sushi abominations are ruining the world we live in. This needs to be stopped. 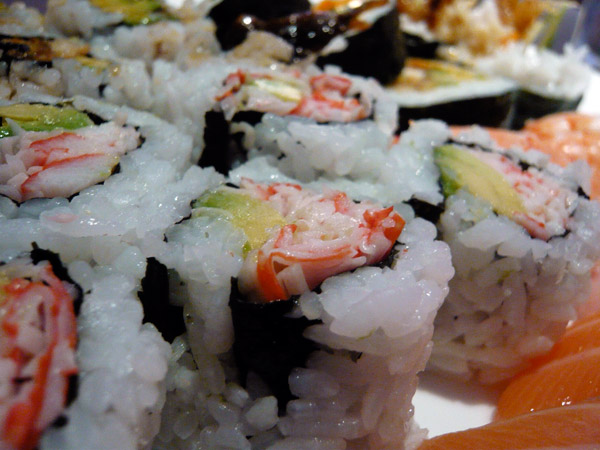 Let’s begin with the sushi roll that started it all. The California Roll. This sushi roll has compromise written all over it, and when it comes to sushi, there should be no compromise. THIS IS SPARTA.

The California roll was introduced in the 1960s in, you guessed it, California (Los Angeles to be more specific). LA is a popular place for Japanese to move to. LA is as American as it gets. At the Tokyo Kaikan Restaurant (one of the first sushi bars in LA), Ichiro Mashita came up with the idea.

GREAT DISHONOR COMPROMISE #1: Instead of raw fatty tuna (toro), he put in avocado, because Americans didn’t like the idea of eating raw things (boo hoo).

GREAT DISHONOR COMPROMISE #2: He made the roll “inside-out” with the seaweed (nori) wrap on the inside, because Americans didn’t want to know they were eating seaweed (boo-dee-hoo-hoo).

Of course, this half-step-child of sushi became popular all across the United States because it was made less real. It’s no wonder you see Olive Gardens everywhere. 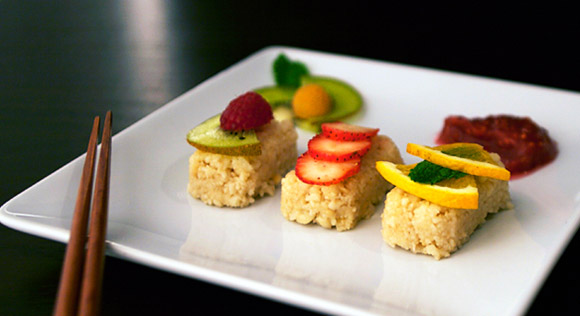 I think the fruishi (that’s fruit + sushi )boom has come and gone (I hope, hope, hope), but that doesn’t mean we should have let it happen. Kind of like sitting back and watching the Nazis do their thing until it was too late, this should have been stopped a long time ago.

There are many ways to make fruit sushi, though the worst ones are the ones that try to be like really sushi (while still calling themselves “new and exciting”). These recipes use regular rice and roll up fruit inside of it instead of fish or vegetables. I think you can imagine why this didn’t catch on for very long.

The other kind, which goes for sweet rice-substitutes (unforgivable!) are a tiny bit better, but this is still the sort of thing I wouldnt allow anyone to bring to my home. I don’t care if it’s a potluck, and it’s raining outside, you’re not bringing that in my home, boy. 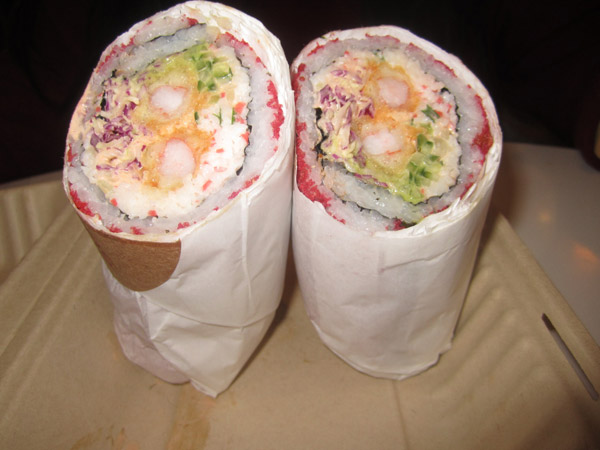 This is the picture that made me think of the topic for this post. I mean seriously… what do you say to this? While I’m sure this sushirrito is delicious (it pains me to say so), I think it’s a generally good rule of thumb not to eat anything I can’t fit in my mouth. Look out, Chipotlé… you have a rival.

If you live in or around San Francisco, you can actually get one of these. Let me know how it was if you do!

And last but definitely not least is sushi pizza. Sushi pizza (also known as “Toronto Sushi Pizza”) is supposedly very popular in Toronto, Montreal, and various Northeastern US states. While most of the sushi-blame-game so far has been targeted at the United States, Canada is close enough. I’m sure they can ruin hundreds of years of tradition just like Americans can (though, I gotta say, gravy on fries? Well done Canada, well done).

Sushi pizza consists of a fried rice patty as the base with layers of sliced ingredients (popular ones seem to be avocado, different kinds of fish, and mayonnaise). The claimed inventor of this dish can be found in Montreal, Quebec at the Atami Sushi Restaurant.

What Will They Think Of Next?

You tell me. Sushi burgers? Sushi tacos? McDonald’s Sushi Burgers?  Oh gosh. I’m not sure if I can survive in a future where these things exist. Seriously, the sushi mutations are moving faster than anyone can hope to contain. I’m going to head off and start digging the hole for my bunker now before sushi gains sentience.