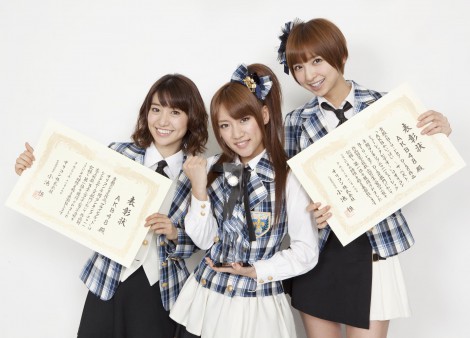 AKB48 released 5 singles this year, and all 5 sold over a million copies.  Though three groups; Pink Lady in 1978, Hikaru GENJI in 1988, and Arashi in 2009, have monopolized TOP3 of Oricon’s yearly single ranking in the past, this is the first time for any artist to monopolize the TOP5.  Selling over a million copies for 5 singles in one year is also a new record broken by AKB48 for the first time in 16 years when B’z and Mr. Children made the record with 4 singles in 1995.

Team A Captain, Takahashi Minami, who was present to receive a trophy for the “Total sales by artist”, commented surprisingly at the records they made, “Thank you for letting us have this wonderful prize.  This makes me feel that we are accepted by people for a little bit, and also makes me really happy“.

Oshima Yuko also said, “It was a big surprise.  When AKB48 started 6 years ago, it was like ‘the future is a closed book’ for us, and I never expected that AKB48 would be able to become the group to make these records.  I’m honored“.  Shinoda Mariko also stated that she wants to aim for more next year.