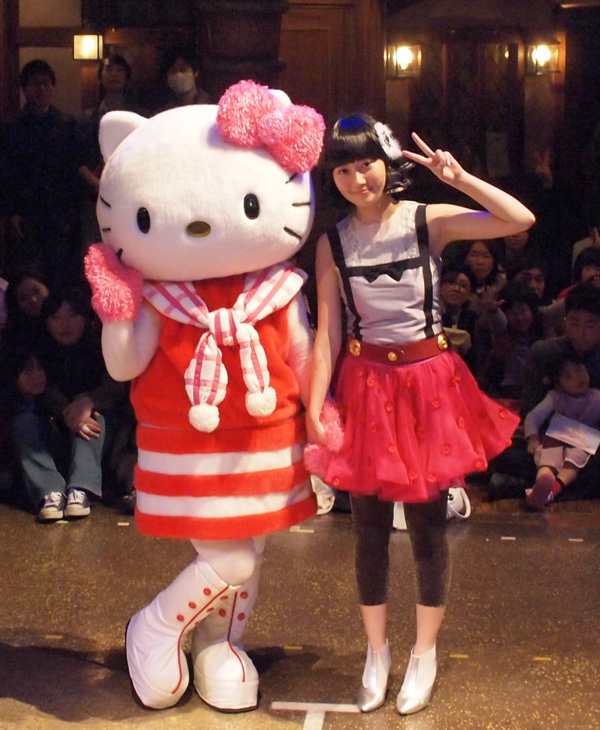 The event was part Christmas celebration, and part in celebration of COLTEMONIKHA’s new song “Usotsuki Jingle Bell” being chosen as the theme song to the park’s brand-new illumination show, “Hello Kitty’s Magical☆Lights“. Since the duo has just released their first album in four years, a huge crowd of approximately five hundred COLTEMONIKHA fans and their families were gathered around the stage, where Sakai and Hello Kitty welcomed everybody into the Christmas wonderland.

Wearing Christmas bells in her hair and an adorable red tutu, Sakai Kate performed a total of four cute songs while cutely dancing along. “It’s my first live in about four years, but I was able to do it so happily because you received us so warmly,” she said to the crowd, looking excited to stand next to Hello Kitty.

“Usotuki Jingle Bell” was featured on their best-of album “COLTEMONIKHA BEST” and was also released through iTunes in November, where it stormed the electronic charts and took the number one spot. Seeing the song rank so highly, the producer of Sanrio Land events contacted COLTEMONIKHA and decided to make “Usotsuki Jingle Bell” the image song for their new light show.

“COLTEMONIKHA BEST” contains two new tracks from the collaboration unit, and was remastered by Nakata Yasutaka himself. The beautiful, picture book-like packaging was designed by Sakai Kate, making for an album entirely put together by COLTEMONIKA.