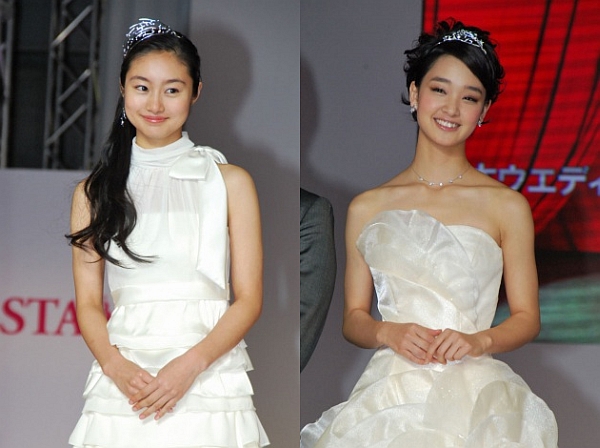 On December 23rd, nineteen-year-old actresses Kutsuna Shiori and Gouriki Ayame received the ‘2nd Japan Wedding Best Dresser Award‘. They attended the event wearing beautiful wedding dresses, which was a first for both.

The award is given based on, ‘celebrities that people would like to see in a wedding dress the most’.

Having yet to grow accustomed to such dresses, both of the young actresses had to watch their steps as they walked in front of the reporters.

Gouriki commented, “I’m really happy that I got the chance to wear such a dress. However, I didn’t think it would be that difficult to walk, I keep on stepping on the dress. Still, it makes me really look forward to the future!”

Kutsuna was just as happy and said, “It’s an award every women would be happy to receive. I want to wear a similar dress for my own marriage ceremony.”

In response to the question, when they would like to get married, both of them replied, “I don’t know~“.

The two actresses were also asked to make a comment on the past year of 2011 and to reveal their plans for Christmas.

Gouriki stated, “It was a perfect and happy year for me.” As for Christmas, she continued, “I will have to work from morning till evening.”

Kutsuna explained, “It was a year with many partings and first meetings, as my surroundings changed with the graduation from senior high school.” Being a native Australian, she added, “It still feels new to me that I have to wear a muffler during Christmas. I guess I’m still used to the warm Christmas season at home.”

Model Mori Riyo also received an award. She is going to celebrate her birthday on December 24th and commented, “I worked really hard this year, but there are still various things I have do better next year in order to look back and give it full marks.”