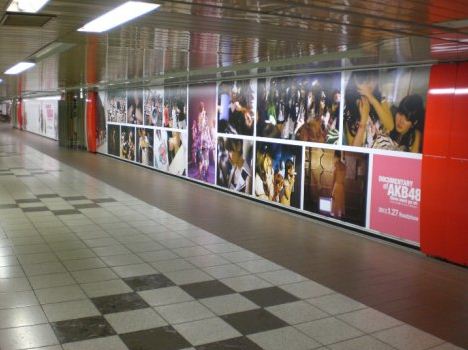 To advertise popular idol group AKB48’s upcoming documentary movie “DOCUMENTARY of AKB48 Show must go on Shoujo-tachi wa Kizu Tsukinagara, Yume wo Miru“, a gigantic, 80 meter (262 feet) poster has been put up inside the promenade at the Tokyo subway’s Shinjuku Station.

The poster, which takes up enough space for approximately eighty regular B0 size posters, features the girls of AKB48 behind the scenes of their live performances on stage. Fans can view it in the subway station until January 9th.

As tokyohive previously reported about the documentary (which officially hits theaters across Japan on January 27th), the cameras followed the girls of AKB48 closely for an entire year, recording them “in the raw” as they rushed throughout Japan due to their busy schedules as top idols. In the documentary, AKB48 fans will be able to see the suffering these idols sometimes feel from being in the spotlight 24/7, as well as view exclusive interviews shot for the film.