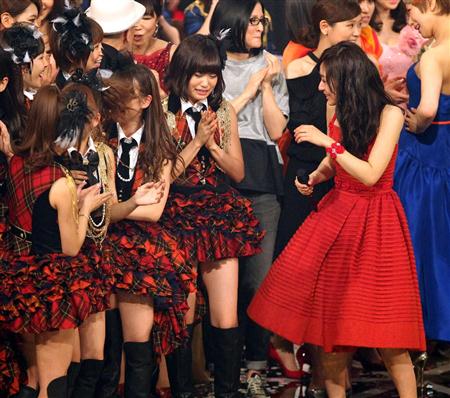 At the ‘62nd NHK Kohaku Utagassen’ held at NHK Hall on December 31st, the Red team broke their six consecutive losses at this event with the power of artists such as Ashida Mana and AKB48 thus winning for the first time in 7 years since the ‘55th Kohaku Utagassen’ held in 2004. Although the White team is leading in overall victories with 33 wins versus the Red team’s 29, the red team took the win for this year while stopping the White team’s most consecutive wins in the history of this program.

In the first half of the show, this year’s Japan Record Award winner AKB48 performed their special medley followed by Ashida Mana’s stage with White team’s Suzuki Fuku in “Maru-Maru-Mori-Mori!”. At the last half of the show, Koda Kumi gave her powerful performance along with K-pop groups KARA, Shoujo Jidai, and other starring artists such as Matsuda Seiko, Kanda Sayaka, and Matsutoya Yumi.

Actress Inoue Mao, who took on the role as the host for this program for the first time, received the victory flag and said, “This is all because of everyone. Thank you so much,” and shed her tears with this comment.