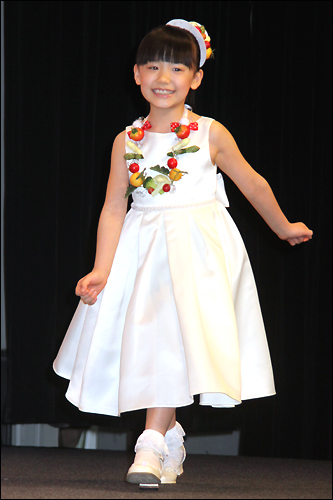 Ashida Mana is probably the biggest child star in Japan right now (with 16 CMs on air) but, allegedly, her fee has increased so much that it has become hard to use her. Perhaps this is the beginning of her downfall?

“Ever since the end of last year, she seems to be miffed when she gets called Mana-chan. So the staff has been calling her Ashida-san. She even said herself that she’s an actress, and probably prides herself in that. When someone from a tv station called her for a phone conference, they accidentally called her Mana-chan and she spat back, ‘Please call me Ashida-san!’”

Koike Masaharu, a tv journalist, said that “Mana is a huge star in the TV world right now, especially in CMs. She is loved by people in the F2 consumer tier (females ranging from age 35-49) because they are the same generation as her mom. So sponsors love using Mana-chan to hawk various products. But she is in too many CMs, and that makes it almost impossible for her to go on location for variety shows. Sponsors pay a lot of attention on location shoots, if she is seen with another company’s products, that’s probably bad for their image. Since Mana is the spokesperson for the 7Eleven group in Japan, and that company has many different products, she can’t be seen on TV in another company’s convenience store or supermarket.”

Even when Mana does go on location, she can’t really be seen holding anything because of her contracts, and that has created problems for the television staff.

Before she got insanely popular because of Marumo no Okite, her fee for one hour of appearance ranged from 30,000yen to 50,000yen. Right now, it has increased to 700,000yen to 800,000yen. There are even stations who are willing to pay more than that depending on the circumstances. But her ratings peaked at Nov-Dec of last year, and recently, she has not been drawing in the high numbers she used to. Some people are even blaming the fact that it’s because her appearance fee is too high.”

In contrast, child star, Honda Miyu (from Kaseifu no Mita) is getting popular and can pull in the ratings. “So now people have been asking Miyu-chan to go on their shows instead of Mana. Her schedule is filled all the way up until the end of March!”

Child stars usually have short careers, and with Mana being so busy, people have been voicing concerns about whether she can have a normal childhood because of her schedule. Many people are wondering if Mana will still be relevant come next year.