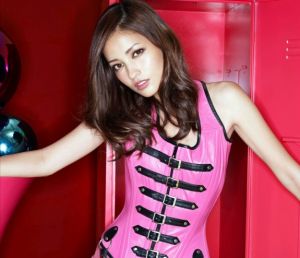 --Congratulations on the completion of your album. How are you feeling?

Meisa: I’m happy that I’ve gotten two albums done; 2011 was really busy. (bitter laugh)  “MAGAZINE” was released at the beginning of the year, and right after that I went to Spain for filming [of “Andalucia Megami no Houfuku”], but before filming was completed I did photos for a drama [“Shiawase ni Narou Yo”], and I also went into another drama [“Jiu: Keishichou Tokushuhan Soukakei”]. Because of all that activity, I put everything I had into my shoots during first half of the year. But in the second half of the year, starting with my solo live preparation in about September, I focused solely on music and didn’t do anything with movies or dramas; I really concentrated on creating music.

--The world “unlock” means to release or open a lock. What were your thoughts when you chose this title?

M: I’m always thinking that I want to do something new. I think that I have to continually change and evolve. And I think that, rather than opening a door to myself or breaking out of my shell, it should be an explosion. I say explosion, but it has nothing to do with anger.

--As you were creating this album, did you have any personal rules about what you would and would not do?

M: There’s nothing that I specifically decided on, but looking back on it now, I consciously wanted to try singing even the songs that I wouldn’t have chosen for myself. There are songs I liked that I was hesitant about, so I chose songs that I got caught up in or that tugged at my heart strings.

M: For example, “Flash Light” shows a new aspect of me, and “S.O.S.-Watashi Sagasanai de Kudasai-” shows a new state of mind for me too, but in a different way. I feel like this is the first time that I’ve done that kind of beat.

--”Flash Light” is a very poppy melody, even considering your history. The lyrics express a new state of mind, but the sarcasm of the lyrics also suit the song.

If I can’t love myself, no one else will love me

--”Flash Light” is a song from a celebrity to the gossip magazines that chase her around, and includes some sarcasm as though to say, “Well, while you’re taking my picture, at least I’m bathed in light.”

M: Yeah. [The paparazzi will show up while] I’m just going someplace with a sweater on, but lately I’ve been thinking of it as an opportunity to get made-up for pictures. Even if I’m just going out for lunch, I get all made-up before I leave. They may as well have cute pictures. (laugh)

--So what songs tug at your heartstrings? What songs reflect your real feelings?

--Heh heh. “Sagasanai” [“Don’t look for me”]. (laugh) There are a lot of songs on this album that have the theme of escape. It seems to be tied to the release of restraints, destruction of the status quo, and personal emancipation.

--What part of “Take Me Away” tugs at your heart strings?

M: This is something I think women will understand. When it feels like you’re together with someone but can’t quite seem to move the relationship forward, women want men to take the reigns. It’s like, all he needs to do to shift the dynamic is a do single action or say single word, but he doesn’t. But, even though it’s irritating, it’s not really a deal-breaker. That the kind of love I sing about in this song.

M: “Happy to be Me” also expresses my feelings perfectly. When I heard the part where it talks about how the strength of making an enemy can give you courage but is also painful, I thought “Yes, exactly.” This is a very “Meisa” song. At the very beginning, where it says “Jibun no koto sura ai senai nara” [“If I can’t even love myself”] is the same way. When I did the photoshoot for the Uniculo CM interview, I said the same thing. If I can’t love myself, no one else will love me.

--That’s what you believe.

M: Yes. It doesn’t matter how good I am, or how good I am to other people. Also, it really hits home for me when it speaks about how, if you don’t get confidence through transformation, you must be doing something wrong. Transforming yourself and doing something new are difficult. I think there were a lot of warnings for people like me who see the drawbacks of change, and who try to pretend that we’re truly transforming. The song is saying that  if you can’t change, you can’t even protect yourself and that’s a mistake. That’s what the lyrics are really about.