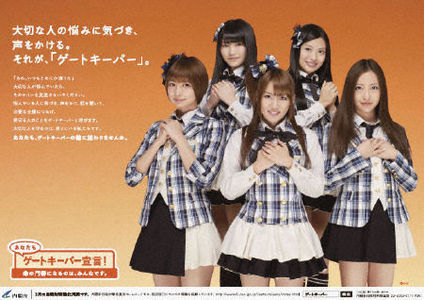 Suicide is serious. It's horrible. It's touched many people in Japan, which has one of the highest suicide rates in the world. The ruling political part decided to take action to help prevent it: with a slogan and cute idols.

Earlier this month, the Democratic Party of Japan unveiled a new suicide prevent slogan: "Anata mo GKB47 sengen!" (あなたもGKB47宣言!) or, roughly, "Proclaim yourself as part of GKB47!" The slogan seemed inspired by one of Japan's most popular bubblegum pop bands, causing some politicians to dub the slogan as "deeply inappropriate". It even made country's prime minister uncomfortable.

According to Japan Today, the "GK" refers to "Gatekeeper", which in Japan is used to refer to those who notice signs of depression in others and helps them seek treatment. The "B" refers to "Basic", as if to infer that this is a basic responsibility that is shared by all. The "47" refers to Japan's forty-seven prefectures.

While the slogan certainly has good intentions, it sounds too close to AKB48, the most popular female pop group in the country. In Japanese parliament, the slogan was debated, with some calling it "improper", because the slogan not only seemed to trivialize suicide but inadvertently evoke the pop group.

"To speak plainly, I too felt uncomfortable," said Prime Minister Yoshihiko Noda (via Japan Today). "I think I'd like to see further research conducted on the matter."

High suicide rate notwithstanding, suicides in Japan feel far more common than they do in other countries. If you take the morning commute in big cities, then no doubt, you've experienced train delays due to someone throwing themselves on the tracks. It's such a problem in Japan that the railroad families demand the deceased families pay a penalty (which has caused some individuals to use this as a means to get back at their family after they commit suicide).

According to Yahoo! Japan, the number one cause of death for teens as well as people in their 20s and 30s is suicide.

That's why AKB48 has agreed to act as official spokespeople for anti-suicide prevention. The GKB47 slogan is being withdrawn; it's now "Proclaim yourself as a gatekeeper," and AKB48 members appear in the public service announcements in mini-skirts and plaid coats.

So much of what AKB48 promotes is frivolous, whether that be vegetable juice or chocolate snacks, but the group does do good things—it even donated more to the earthquake survivors than Nintendo and Sony did. Even their songs sometimes appear trivial. But sometimes, just sometimes, this idol group is anything but.

I hope they go about this the right way.
Leave a Comment

neechee_striped 25th-Feb-2012 03:07 am (UTC)
a slogan for an issue like suicide should be something positive imothey should go with gkb47.
but i can't really tell if the girls are good to be a spokesperson for this because i'm too biased (◡‿◡✿)
i hope this actually helps. suicide shouldn't be something so common. ):

taylorniw 25th-Feb-2012 03:52 am (UTC)
I think they're going under the assumption that the casual listener only listens to the singles. Which is probably true. And people don't take serious songs seriously from idols. The way they're marketed and packaged makes it more difficult.

kame_94 25th-Feb-2012 05:08 am (UTC)
Fan-service aside, I feel like a lot of adult idol fans in general choose to follow idols because their music is so cheerful and has a "never give up" type of attitude

morpheuslove 25th-Feb-2012 11:18 am (UTC)
at first, yeah, this made me a little uncomfortable too. like depression and suicide is suddenly curable by some idol group. but now that i think about it, i think its a good idea to get it out into the open. the campaign is to encourage people to act upon the warning signs and because the suicide rate in japan is what it is, it is most certainly a public issue no matter how uncomfortable. if this campaign gives even one person the courage to speak up about someone theyre worried about, i think some good has been done.

mrwaffle 25th-Feb-2012 11:24 am (UTC)
Now if only AKB48 had done a song about suicide, it could've been mentioned in the article. Maybe their 5th single. Maybe called "keibetsu shiteita aijou".