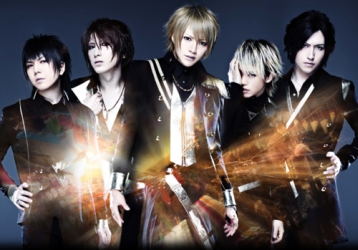 --Musicality that isn't caught up in genre, a grand worldview that envelops the entire album. This album, appropriately named "9," really shows off the special qualities of Alice Nine. What are your thoughts on it?

Shou (vocals): We're a band that's turned our hands to various genres since the beginning. We didn't go through that stage where we're a new band trying things out; we hit upon a sound that we liked on our previous album, "GEMINI," and "VANDALIZE" before it. On "9" it feels like we're returning to the standard Alice Nine, but we're taking advantage of the challenges we've experienced to give the sound a persuasive power. I think this is the album where we loudly proclaim, "This is who we are as a band."

Hiroto (guitar): I think some people will have the impression that we took the theme from "GEMINI" and expanded on it in this album, but I think instead we just opened up to our we current situation without thinking about it too hard. Of course there were many different challenges, but I think that we were able to cram in as much as suits us as a band.

Saga (bass): The scale of it arose organically. We weren't planning for it to come out that way; you could say that it was idiosyncratic.

--You've accumulated a lot up to this point. Why do you think you've been able to able to achieve this naturally?

Sh: Hmm... Well, back in January of last year we were able to have a solo live at the Budoukan. I don't think that we were able to do that on our own; it reaffirms our ties to our fans and our staff, and re-focuses our feelings for them. Also, because we were able to release an album like "GEMINI." Broadly speaking, I think those two things gave us the confidence. It didn't feel like we needed to do the impossible to show who we are.

You can't really call us "no good"

--So you're saying that, as a result, you were able to bluntly express the musicality you inherently possess.

Sa: We don't "inherently possess" that musicality. It's not like we formed the band just because we all take a particular interest in music; the musicality arose as we worked. You can't really call us "no good." For example, if a band suddenly found themselves with a metal song because of a clashing chord, that would be no good.

--So you're saying that, as a band, those kind of situations don't happen to you.

Sa: Not quite. It's that none of our members are overly formal or strict, and no matter what song we write, there's a certain atmosphere to it. Because we like all kinds of music. We like metal, we like J-pop and popular songs, and we also listen to ambient.

H: And we'll keep listening to them.

Sa: But we make plenty of mistakes. (laugh) There's no such thing as a band that's good at everything; everyone's a little clumsy.

Sh: So if there are unexpected bits, we have to smooth them out.

Sa: It's not our genre that's cool, there's a coolness to the music itself. Something like that.

--Has anyone outside the band ever said, "Wouldn't it be better to have a process that's easier to understand?"

Sh: No, we've never heard that. People have asked if it's hard to change to all of our different tunings during lives.

--You do have a lot of songs that require unusual tuning.

H: Yeah. (laugh) We have like five different kinds, don't we?

Sa: We've never had a live where we used only one tuning the whole way through. (laugh)

H: I've noticed that, but it still takes a lot of time. It really takes us out of our way.

Okano Hajime is very close to us

--You worked with Okano Hajime to produce this album, as you did with your previous album "GEMINI." You've worked with other producers on singles, so what made you decide to work with Okano again?

Sh: He challenged us when we were working on "GEMINI." We thought it was really good. When when we got together before working on this album, we said, "We want to work with Okano again."

H: He's very close to us. We have the sense that he's crafting the sound together with us.

Sa: It's because he isn't limited by genre; he persues new sounds. He thinks big and is diligent about a lot of different things rather than only concerning himself with performances or minor phrasing. He can look at a troublesome spot and say, ''Let's think about it more simply,'' but on the other hand he can also see the places that we need to look at more closely.

--I see. Now let's look at some of the songs. The intro of the first track, ''Heavenly Tale,'' has a mood that draws the listener into a colorful music world. Saga , you composed it; did you realize that this would be the opening of the album?

Sa: I did. When were putting the album together, we each thought about what we should do for the opening and closing tacks. After we'd locked that down, we planned out what to put right in the middle.

Sh: When it came time to figure out the album and how it would relate to a setlist, Saga took the initiative. That way everyone could contribute ideas together freely.

If I heard us as we were 7 years ago, I'd burst out laughing

--The album is bursting with compositional power. Saga also composed the second song, [''the Arc''], which is a very ''metallic'' number. You've never really had song like this before.

Sa: No, not really. That is to say, until now we've let quite a lot of blundered phrases slip through. We'd use the double bass drum or hack something out with the guitar. I know we just said ''you can't call us no good'' but we didn't have songs like this one back then. (laugh)

H: But this song has the number one feeling that Saga was trying to avoid.