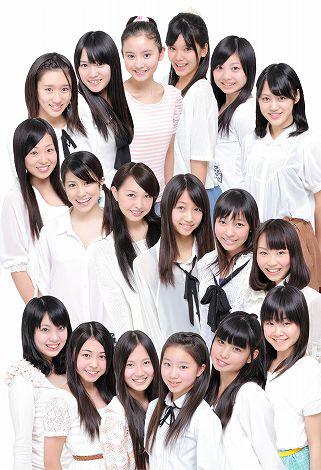 Entertainment company Sun Music started off with their first talent Morita Kensaku back in 1968. Since then, the agency has had many popular idols under their name such as Sakurada Junko, Matsuda Seiko, Hayami Yuu, and Okada Yukiko. However, Sun Music has never created an idol group — until now.

The company is currently working on training 18 talents to become members of their new idol unit. The unit currently has an average age of 14.9. From here on out, the girls will be battling it out and those who survive will be able to debut as a member of the group. The project is currently being held through “Nico Nico Douga” and the viewers will be the ones to ‘produce’ these 18 new idols.

The idol training project began on ‘Nico Nico Douga’ on November 18, 2011 on their official channel “Sanmyuu”. 1,000 girls participated in training lessons in 18 different schools throughout the nation. They then auditioned and 11 candidates were chosen. People can witness the teamwork among the girls as they view special training sessions and radio broadcasts on the video channel. However, the girls have powered up with 7 new girls being added to the group, creating an idol unit of 18 members.

The concept of this idol unit is: ‘An idol unit whose viewers’ create with their opinions and with members who are self-produced.’ However, not all of them can debut, so from here on out the 18 girls must overcome various obstacles and the last members to survive will be able to debut. The group’s name and tasks for the members will be influenced by the viewers’ opinions. Viewers will also be able to vote on which members are selected. This is truly a real ‘hand-made idol group’.

The members are 13-17 years old and live in various places throughout the nation. They currently have lessons at their own schools and then travel to Tokyo once a week for special singing and dancing lessons. Sun Music backs their new idols stating, “We want to create stars. Sun Music has always wanted to push more new singers.” The company also hopes that through the group’s activities they can eventually become solo idols. It’s currently the warring states for idols and new idols continue to be born.