L’Arc~en~Ciel rocks! (thats the name of the article in the source) 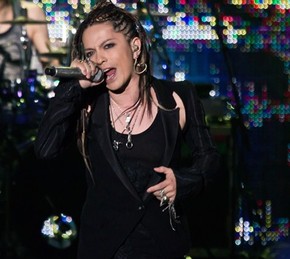 The band, consisting of lead vocalist Hyde, guitarist Ken, bassist Tetsuya and drummer Yukihiro, was on their 20th anniversary world tour, and made a stop at the Singapore Indoor Stadium last Saturday.

The two-hour show saw the band taking over the stadium hall with 19 of their biggest hits, including “Ready Steady Go”, “Stay Away”, “My Heart Draws A Dream”. They also performed tracks from their latest album “Butterfly”, which included “Chase”, “Good Luck My Way” and “X X X”.

L’Arc~en~Ciel debuted in 1991 and rose to fame as one of the prominent “visual kei” bands of the times. It was their heavy make-up, often elaborated outfits and hair, coupled with their edgy sounds, which carved out their careers for this long.

20 years on and with 12 full studio albums, this multi-million selling band sure does continue to mesmerize everyone with their music. And yes, the members are already in their 40s, but the energy level of the night’s concert took off on a high, and fans practically stood throughout the show, waving their light sticks and singing-along on the chorus.

The impressive visuals on the big screens, with the interchanging red, green and blue stage lights, added to the entire aural and visual experience of the concert. I must say, Hyde’s sexy vocals truly left the deepest impression. The versatility, the ease of delivery of every song, hitting the high notes almost effortlessly, and how each note resonated with the audience, especially on the ballads - it was simply amazing!

Well, all was not just a mere rocking affair. The audience was tickled with a little L’Arc~en~Ciel humour too! During the short talk sets, Hyde joked of getting drunk on Singapore Sling, and guitarist Ken even gifted bassist Tetsuya with different Merlion-themed souvenirs in six sizes, including plush toys, figurines and key chains, all of which are pink in colour. Tetsuya displayed every gift in sequence of size in front of the audience, drawing much laughters from the crowd.

The show ended with the song “Niji”, and white feathers started falling from above, immersing the audience in a set that somewhat resembled that of an anime scene.

So, to quote Ken at the concert: “Singapore ho seh boh?”

What more can I say? 20 years was worth the wait. Just two words - L’Arc~en~Ciel rocks!

Source: showbiz
I was in the concert, it was so freaking awesome. Hyde definitely looks better live and he is constantly teasing the audience, and his vocals is amazing. Ken and Tetsu are very childish too, when they're giving a speech. Tetsu asking the audience who want his banana and lollipop lol. My favourite part is when they perform Anata, its simply breathtaking. Oh and Hyde teasing the audience when he was going to sing Honey, he kept mouthing "zut" then stop and smile at us.