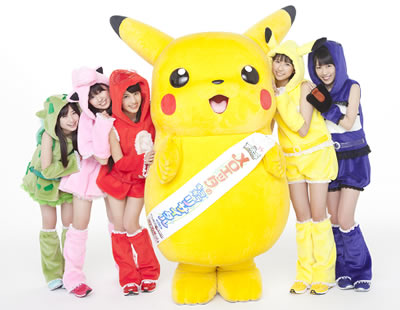 The five girls of the idol group Momoiro Clover Z announced during their Children's Day event on Saturday that their "Mitemite Kocchicchi" (Look, Look Over Here) song will be the ending theme for "Meloetta no Kirakira Recital" (Meloetta's Sparkling Recital). "Meloetta no Kirakira Recital" will be the first 2D short paired with a Pokémon feature in nine years. The short will precede the July 14 Pokémon film Gekijōban Pocket Monster Best Wishes! Kyurem Vs Seikenshi Keldeo.

Momoiro Clover Z performed the song for the first time in public at the "Momoiro Clover no Kodomo Matsuri da yo! Zenin Shūgō" event on Saturday. Before an enthusiastic crowd at the Culture Hall at Saitama's Toda City, the idols dressed in Pokémon-themed costumes: Kanako Momota as Charmander, Shiori Tamai as Pikachu, Ayaka Sasaki as Jigglypuff, Momoka Ariyasu as Bulbasaur, and Reni Takagi as Croagunk.

Their kigurumis are so cute! I want the Jigglypuff one!