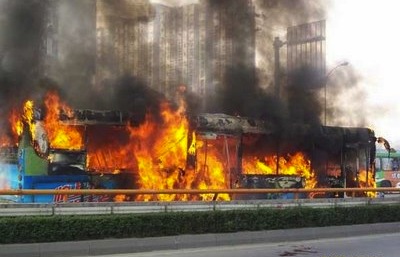 Popular idol group, Kis-My-Ft2's equipment truck caught fire on May 14 while driving up the Chūgoku Expressway in Toyonaka City, Osaka. It took approximately an hour and 20 minutes to put the fire out. According to the fire department, the driver realized there was smoke coming from the truck at 10:40am. The load-carrying area caught fire, and the authorities of Toyonaka City are investigating the damage. The Osaka Monorail, which uses the area above the road, was stopped for an hour, and resumed services at noon.

Kis-My-Ft2 had performed in Hiroshima on the 12th and 13th and the equipment truck was returning to Tokyo at the time of the fire.

these boys are so SMOKIN HOT i'm not surprised something like this happened! feel the Kisumai heat!!!