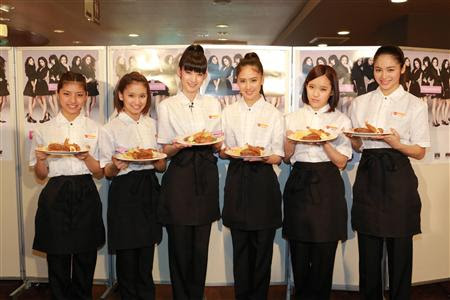 On May 16th, EXILE’s 6-member sister group Happiness (who has an average age of 15.7 years old) appeared at a commemorative event at the Gusto restaurant in Takadanobaba, Tokyo for their new song “We Can Fly,” which was released on the same day.

The song is currently used as Gusto’s campaign song and each of the members took on the challenge of their “First Ever Part Time Job.”  The 6 members, who appeared wearing the store uniforms in front of their fans, smiled and served food as they said, “Thank you for waiting!”  Before the event, the individual responsible for training them said, “Everyone looks nervous,” and YURINO (16) smiled anxiously as she stated, “It is different when you are actually performing live; I was nervous.”

As the group performed live in the restaurant close to their fans, SAYAKA (16) stated, “Because (the dance) is intense, I was nervous about accidentally hitting fans.”  MAYU (16) commented, “It is a song which we have sung with all our might because we want to have our dreams come true.  It is a support song for everyone.”