Arashi unveil what’ll be in this year’s 24Hr TV

Arashi, this year’s main personalities for the charity special 24Hr TV, talked about what to expect this year during a press conference in Tokyo on June 26, reports Chunichi Sports, Sports Hochi, and Daily Sports Online.

The five of them will be joined by actress and charity personality Yui Aragaki, and TV announcers Shinichi Hatori and Nana Suzue for this year’s “２４時間テレビ３５『愛は地球を救う』(24Hr Television / Love Saves the Earth’)“.

It has been reported the theme this year is “未来 (Future)”, which members said the group will make most worthwhile.

“Us, Arashi have been fortunate to take part in the 2004 and 2008 Olympic year shows.  We’re very happy to have been asked to join the show once more this year.  I hope we can make it a hot summer which will lead to a ‘future’ just as much as the Olympics and Paraolympics do,” Sho Sakurai said.

“‘伝える (give a message)’, ‘作る (create)’, and ‘つないでいく (pass down)’.  I hope we can all help one another to create a variety of futures,” Kazunari Ninomiya said.

Arashi leader Satoshi Ohno worked with Japanese artist Yoshitomo Nara to design this year’s T-shirt. “We decided on this design after three meetings … Nara-san’s from Aomori so it depicts an apple* ,” he said. 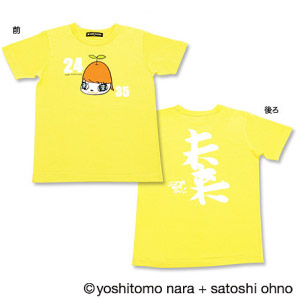 It has been reported when reporters asked Ohno about his short haircut, he said it was all part of his plan. “This is a challenge.  I’ve never been on 24Hr TV in the past with a new short haircut.”

Actress Aragaki also said she would depend on Arashi for help. “I feel really nervous standing next to these national pop stars.  I’ll be counting on you.”

“２４時間テレビ３５『愛は地球を救う』(24Hr Television / Love Saves the Earth’)” will go on air in Japan on August 25.