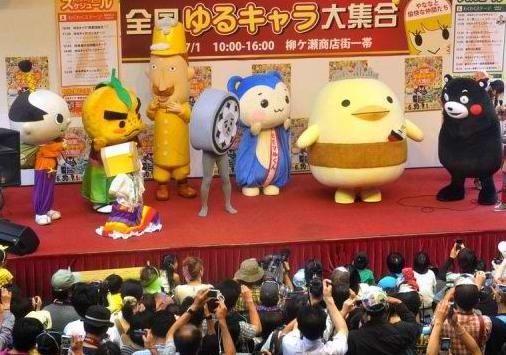 Police forces use them; shops can’t do without them; power companies have them—and sack them when they become unpopular. No marketing or public information campaign is complete without them. Cute, cuddly—or startling—characters are everywhere in Japan.

While marketers the world over have long understood the value of an oversized cartoon animal who can persuade children to part with their pocket money, those in Japan know it is also an effective way to reach their parents.

And despite the tepid economy, there is money to be made.

The licenced character industry, including copyrights and merchandising, is worth a whopping $30 billion a year—more than Japanese people spend on books annually.

But it’s not just the big names—Hello Kitty or Pokemon—that draw the crowds and their cash.

A two-day “grand assembly” in the central Japan city of Gifu attracted around 120,000 visitors who were entertained by 47 adult-sized mascots, one from each prefecture, who treated visitors to songs, dances and endless photo opportunities.

They also had a tug of war, pitting the east of the country against the west, and got together for a tightly co-ordinated song and dance extravaganza.

Among their number were Meron-kuma (“Melon-bear”) from Yubari in Hokkaido, land of eye-poppingly expensive melons and home to wild bears, and Hamburger Boy, a giant walking patty in a sailor’s uniform representing the southwestern city of Sasebo, the seat of a large US naval base.

One of the few human shapes included Lerch-san, a long-faced European with a moustache, based on Theodor Edler von Lerch, who mountainous Niigata claims was Japan’s first ski instructor.

Kumamon, a bear from Kumamoto, a place whose name appears to indicate the presence of the large carnivores, despite their not being found that far south, was one of the more popular characters.

Like many of those present, Kumamon has his own official website, which carries snapshots taken by fans and lists daily appearance schedules.

Many visitors said growing up surrounded by characters like these meant they could continue to appreciate them into middle age.

“Even in adulthood, we find no mental block to them and think they are cute,” said Aki Kamikara, 38.

“I’ll do Internet searches when I get home as I found some new characters I like,” she said.

Her husband, Yuichi, 42, said it had been worth the trip.

“There are a lot of characters I don’t see usually, ranging from interesting ones to good ones,” he said. “It’s fun.”

Yano Research Institute estimates Japan’s character market was worth 2,389.5 billion yen ($30 billion) in the year to March 2011, down 1.7 percent from the previous year.

“The market size is on a gradual declining path over the long term as drops in population and aging of society continue,” the Tokyo-based institute said in a report late last year.

But continued innovation, from stamp rallies and card game competitions that involve the whole family, continue to draw in the punters, it said.

Fans also visit places and facilities linked to their favorite characters in what is called “pilgrimage” and “content tourism,” the report noted.

But the tide can turn on a character.

Denko-chan, the pony-tailed girl who instructed the public in energy saving and safety campaigns for more than two decades on behalf of Tokyo Electric Power Co. (TEPCO) found herself on the scrap heap in March this year.

The company, struggling to cope with the public relations fallout from the Fukushima disaster, has donned sackcloth and ashes and is currently without a cute representative.

Noriaki Sato, president of Radetzky, the event-planning company that organized the get-together in Gifu said characters speak to the Japanese mindset.

“Anime and manga have taken deep root in Japan and people are familiar with many characters from a young age,” he told AFP as Yanana, a svelte female body with a large square head posed for pictures a few steps away.

The yuru-kyara do not speak, but they easily evoke the features of the region they represent, he said.

“Some people prefer the strategy of sending messages that edge their way into people’s minds” in this way, he said.

Those inside the suits agreed that they were part of something that chimed with the nation’s collective soul.

“Japanese people like characters a lot,” said a man in a red mask from the central city of Tsu.

“From children to elderly people, they are pleased when characters appear at events… This is a culture peculiar to Japan that we should take pride in.”