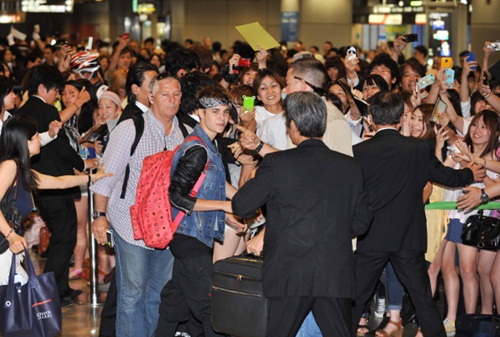 Making his first visit to Japan since May 2011, Bieber told reporters, “I’m glad to have had a chance to come back. The people here are great. I love Japan.”

Meanwhile at home, reports have been speculating as to whether Bieber is heading for a Lohan-esque meltdown after he was stopped for speeding in his Fisker Karma, was reported to be going through a rocky path with on again/off again girlfriend Gomez, flashed his new tattoo on Letterman and then hung up on a radio DJ after inadvertently insulting his late mother.

On Tuesday, Bieber will become the first Western artist to perform in the “Telephone Shocking” section of Fuji TV’s “Waratte Ii Tomo” with host Tamori since the program began in 1982.