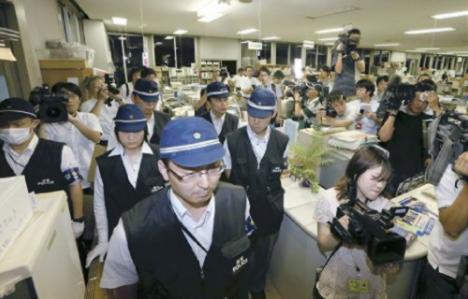 The junior high school in Otsu, Shiga Prefecture, attended by a 13-year-old boy who committed suicide after suffering from bullying, held a meeting Thursday night for parents and guardians.

The boy leapt to his death last October from an apartment building in Otsu. Shortly after, it came to light that bullies routinely forced him to “practice” killing himself before he took his own life, and that his teacher brushed off the abuse as a joke.

After the boy’s death, the school asked students to respond to a questionnaire on bullying. Fuji TV reported that more than 60 students answered that they had seen the boy being bullied in the three weeks before he committed suicide. According to the answers, three bullies punched the boy in the toilet, forced him to eat dead bees, pulled down his pants and taped his mouth.

Initially, the school said it did not think the bullying was a direct cause of the boy’s death, but after news of the questionnaire was leaked, school officials conceded that bullying may have been responsible, Fuji reported. In the second survey, conducted in November, some students reported seeing the bullies forcing the boy to take part in a mock funeral.

Meanwhile, NHK reported that after the first questionnaire results came out last October, the school coerced the boy’s parents into signing a confidentiality agreement before it would let them see the results. The boy’s father signed the document but was outraged when he read the account of what had happened to his son, NHK reported.

Public indignation has grown over the case, resulting in a series of bomb threats against the school and the local government over claims of negligence in the case. A letter sent to the school earlier this week threatened that the building would be bombed unless the pupils and teachers involved apologize, local authorities said.