A few months have passed since our resident reporter Mr. Sato consumed a Whopper loaded with 1050 strips of bacon. Now the smell of bacon grease has finally faded from the office and Mr. Sato seems to have learned his lesson after spending countless hours curled up in the fetal position, praying his arteries would hold out another day.

At least, that’s what we thought until he walked into the office the other day carrying a Whopper with 1000 slices of cheese in his hands. 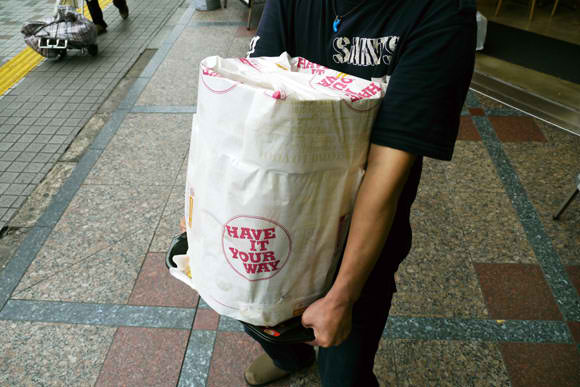 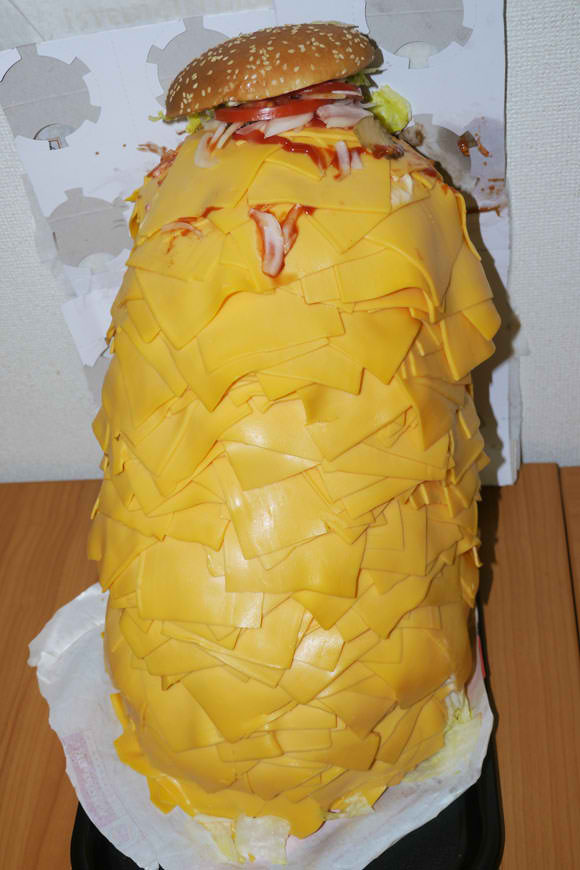 This time Mr. Sato was considerate enough to call Burger King 3 days ahead and ask if 1000 slices of cheese on a Whopper was a thing that could actually happen. The manager graciously agreed to let him have it his way and 3 days later he went to the store to pick it up.

Like last time, the burger was so epically huge that the staff had to tape together several sheets of wrapping paper in order to completely cover it. They also provided Mr. Sato with a few plastic trays to load the 12kg (25lbs) burger on so he could safely transport it to our office.

Which he did, and when someone walks in carrying a burger with 1000 slices of cheese on it, you don’t send them back for a refund. So we began unwrapping the paper pillar from the top, revealing a small helping of veggies and ketchup scattered atop a disproportionally large pile of cheese (the top bun had fallen to the side).

It was then we noticed that the staff had actually MacGyvered a frame from cardboard drink carriers and cellophane tape to keep the burger from falling apart. Now that’s service!

After finishing unwrapping the burger, Mr. Sato sat down and got to work. He commented on the taste: “At first I thought it would be too rich and greasy, but I was surprised to find that it had an incredibly mellow and crisp flavor.”

Mr. Sato managed to finish about 350 slices before giving up, explaining: “It tastes good, but if I eat any more I won’t have room for dinner.”

Wonderful. So, like last time, the rest of the office is left to clean up what Mr. Sato couldn’t finish. We’re going to need a lot of bread…