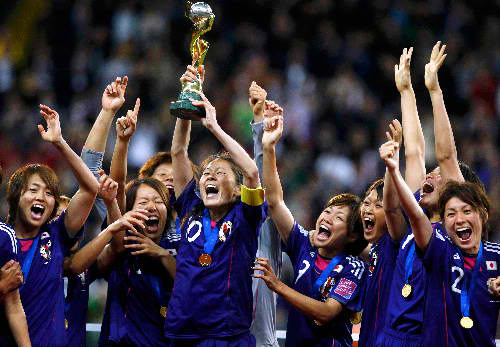 Japan’s world champion women soccer team have kicked up a fuss after being left in economy class while their male colleagues lived it up in business on a flight to Europe for the Olympics.

The gold medal hopefuls of Nadeshiko Japan flew in premium economy on the Paris-bound Japan Airlines flight while the nation’s under-23 men’s team—medal outsiders—sat up front on the same plane.

“I guess it should have been the other way around,” World Cup heroine Homare Sawa, 33, told Japanese media after arriving in the French capital on Monday.

“Even just in terms of age, we are senior,” she said, with a smile.

Sawa, the 2011 FIFA Women’s World Player of the Year, will be the oldest Japanese player in London.

The men’s Olympic soccer competition is played out among under-23 teams with each of them allowed to have three over-aged players. There is no age restriction on the women, but few teams comprise only professionals.

Sawa, who will be taking part in her fourth and possibly final Olympics, said a solid performance in London might boost the chances of an upgrade on the way home.

“When we won the World Cup, our seats were changed to business class for our return flight,” she said. “I hope we can produce a good result again and be treated the same way.”

The Japanese Olympic Committee allotted economy class seats to London-bound Japanese Olympians, except for physically large athletes in judo and other sports.

Star athletes often upgrade their tickets with the help of their sponsors.

The Japan Football Association has helped change the tickets for men to business class since the 1996 Atlanta Olympics in consideration of their full professional status.

For the London Games, the association upgraded the women’s tickets one notch to “premium” economy class in recognition of their status as potential medalists.

Nadeshiko Japan will open their campaign against Canada on July 25, in a group that also includes Sweden and South Africa.

The United States, who lost to Japan in the World Cup final, will play France on the same day before taking on Colombia and South Korea in their bid for a third straight Olympic title.