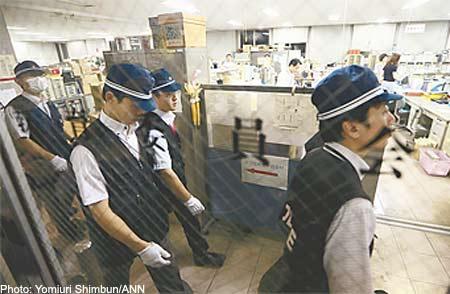 OTSU--The father of a middle school boy who committed suicide last October has filed a criminal complaint with police against three schoolmates who he claims continuously bullied his son.

The complaint, which accused the three students of assault, extortion, intimidation and three other counts, was accepted by Otsu Police Station on Wednesday. The Shiga prefectural police intend to question the three students, as well as obtain statements from other students and graduates of the municipal middle school in Otsu.

The 47-year-old father released comments through his lawyers, saying, "We'd like to have all the facts unearthed to prevent similar suicides."

According to two of the father's lawyers, the remaining three counts were coercion, theft and destruction of property. The act of lodging the complaint "reflects his [the father's] strong will to do everything he can for his son," one of his lawyers said.

The father visited the police Wednesday and spent about 1-1/2 hours describing the bullying his son received from the three students, the lawyers said.

The leader of an investigation team at the Shiga prefectural police's juvenile department created the official document and told the father, "We'll do our best to investigate," according to the lawyers.

The father listed specific acts of bullying he says were suffered by his 13-year-old son in a statement. The claims include:

-- The three students put his son in a headlock, punched him and burned his hand with cigarette butts (suspected assault).

-- They threatened his son to make him give them money and forced him to reveal a bank account PIN number (suspected extortion).

-- They forced his son to shoplift (suspected theft).

-- They ripped up his son's textbooks and school materials, and damaged other belongings as well (suspected destruction of property).

When filing the complaint, the father asked the police to also look into offenses cited in bullying surveys conducted at the school by the Otsu Municipal Board of Education.

The father reportedly attempted to submit a criminal damages report three times after his son committed suicide, but the police did not accept it.

Earlier this month, it was revealed the education board did not make public some survey results, including testimony that the boy was forced to practice killing himself.

On July 11, the prefectural police searched the school and office of the education board as places related to suspected assaults committed by the three students.

"I can now tell my son the complaint was finally accepted," the father said in a statement read by one of his lawyers after filing the complaint.

"I hope the facts will be revealed, and that the boys [who bullied my son] will be punished, apologize and work to improve themselves."

However, the alleged bullies said in a written response to the damages suit filed against them, "It wasn't bullying, but a prank."

A lawyer for one of the three students told The Yomiuri Shimbun on Wednesday, "We heard the complaint was filed, but we can't comment on the matter at this moment."

According to a senior prefectural police official, they initially planned to decide whether it was possible to establish cases based on the charges by the end of August. However, the investigation could be prolonged as many people need to be questioned and there are many factors involved in the bullying case.

So, no amicable settlement, I guess? Which is good imho. They need to set an example that bullying is wrong, no matter how it was called.
and honest question here, what's the line between a prank and bullying?