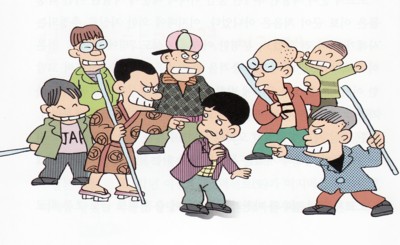 SAITAMA — A 13-year-old boy broke bones in his waist and chest in April after being bullied into jumping off a public junior high school building in Soka, Saitama Prefecture, it was learned Friday.

The board of education believes the boy had been bullied routinely before jumping off the eaves of the second floor in a "test of courage" on April 18.

As a result of the 3-meter drop to the concrete below, the boy sustained broken bones, including in his chest. He has missed nearly all of his classes since school began in April and is still under rehabilitation.

The board did not release the name of the school nor any other details into the incident.

At the request of the boy's parents, Saitama police are interviewing his teachers and classmates, board officials said. According to sources, at least four schoolmates were likely involved in the forced leap. Beforehand, the boy had been ordered to pay an unspecified sum to the bullies or "prove his courage" by jumping from the second floor.

Although considered a die-hard problem at schools, bullying has been thrust into the national spotlight again since the allegedly forced suicide of a 13-year-old student in Otsu, Shiga Prefecture, last October recently came to light. He allegedly jumped off a condominium building after being bullied by schoolmates, who made him rehearse his own death.

In a related move Friday, the Osaka prefectural board of education said it will allow public elementary and junior high schools to suspend bullies if they fail to heed multiple warnings.

Another saddening news but this one is handled a bit better, imo. ....though suspended, only?