In Japan, best to know your garbage 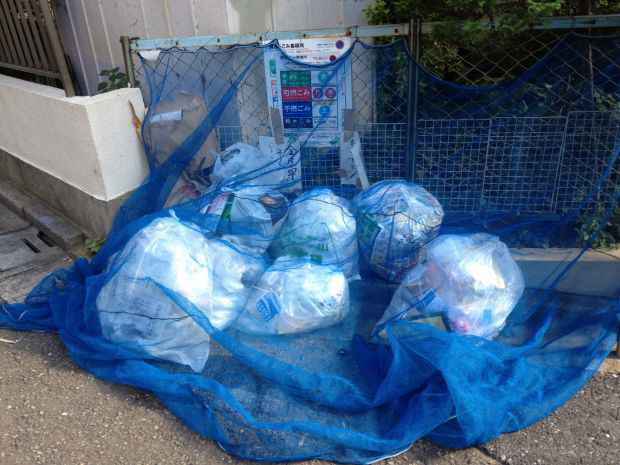 Squatting in my kitchen facing a rainbow of color-coded plastic bags, I was at wit's end. Where should the apple core go? And the broken glass? How about the plastic bottle and empty can? And this cigarette butt? Which day do I put each type of trash out for collection? What time of day? Where?

Recycling in Europe – one bin for glass, another for paper – is child’s play compared to the Japanese trash regime. For a new arrival in Tokyo, handling garbage is an art-qua-nightmare that raises taxonomical questions of the highest possible order.

Looking on the Internet for help and solace, I found this lament from a fellow gaijin (foreigner): "Honestly, I don't understand. The Japanese sort their trash so much that I don't know what to take out on which day."

But if I don't want my kitchen to turn into a rubbish dump, I am going to have to decipher this nightmare pretty soon.

Given the size of the city – 13 million souls in Tokyo proper, more than 30 million in greater Tokyo – one can only marvel at the absence of rubbish containers that decorate the streets of every other city I’ve ever lived in. Instead, four nights a week, small heaps of translucent bags neatly arranged before homes and buildings appear.

The bags themselves are the fruit of much deliberation. To begin with, they are translucent so that the imbecile who leaves something in the wrong bag can be identified and admonished. Such humiliation comes in the form of a red note in the letter box or stuck to the trash bag, which is left on the curb like a badge of dishonor.

These reveal-all bags must be purchased in supermarkets, and running out is no excuse because stores stay open at all hours, just in case. Anti-crow nets, colored blue, are used to make sure scavenger birds don’t rip open the bags with their beaks and splay the contents for all to see. And if the bags are not placed ‘just so’ next to a sign attached to an electric pole indicated precise coordinates… well, I’d rather not contemplate the consequences.

There’s an official guidebook – n.b. the word ‘book’ – that explains the system, but you’d best be sitting down, with a supply of coffee and aspirin on hand, before tackling it.  Think of the worst ‘some-assembly-required’ instructions you have ever struggled with, and then multiply by ten.

You may think that you know a plastic bottle when you see one, even if you don’t have a PhD in organic chemistry. But in Japan, some plastics are holier than others (and the holier ones go out on Mondays not Thursdays). Put an empty dishwashing liquid bottle in with a mineral water bottle, for example, and the garbage collector – or perhaps ‘mobile recycling engineer’ is preferable – will slap a red sticker on the offending bag and leave it on the curb for all your neighbors to gawk at. (The former, you see, should go into a non-combustible bag, while the latter goes in a different kind of receptacle. Assuming, of course, that the dishwashing liquid bottle has been properly rinsed.)

A typical Westerner – that’s me – will, after eating a meal at home, push all the remains on the plate into the kitchen trash bin with a fork or knife, where they join what’s left over from breakfast and the preparations: potato peels, coffee filters, emptied margarine boxes, broken egg shells, the egg cartons, etc.

Not here. Food scraps have their own bag. Cooking oil must be either absorbed with kitchen towels, or "solidified with a coagulating agent". The basics of the Japanese consumer trash protocol are outlined in a (plastic) instruction sheet something like the safety instructions tip sheet in a plane's back-of-the-seat pocket.

But some essential information is not there: what to do with an object that is both plastic and paper? A packet of cigarettes for example? As it turns out, such items must be dissected, with the paper going into recyclable trash and the plastic film going into the ‘combustibles’ bag.

The first time I took a bag out before taking the metro to work – having already checked it umpteen times to be sure I hadn’t messed up – I was as nervous as a student sitting down for a year-end math exam. Would I get my ears boxed if I got it wrong? Later, on my way home, I broke into a cold sweat – would the bag still be there? Will I find a dreaded red card in my letter box or, worse still, on the bag itself? Coming around the corner onto my street, I had my eyes closed. When I opened them… Phew! Nothing! I never imagined that seeing a rubbish bag disappear could inspire such joy and relief.

But it must be said: the Japanese are right. Not only have they achieved an unparalleled level of recycling efficiency at a megacity scale, they do constructive things with what’s left over –Tokyo's Haneda Airport, for example, is built on land reclaimed from waste. And who can deny, as consumerism threatens the environment, that their actions give us hope in building a sustainable future for our planet